Murder in an English Village by Jessica Ellicott 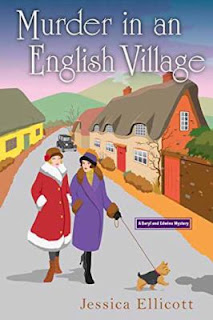 Edwina Davenport is having a bit of financial embarrassment.  A frugal soul, she has made all the economies she possibly can, and it isn’t enough.  She will have to take in a boarder.  Accordingly, she places an ad:  Well-bred lady with spacious home seeks genteel lodger.  Reasonable rates. She knows that this will cause a bit of gossip in the village of Walmsley Parva, but it can’t be helped.

Amazingly, the ad is spotted by an old school friend, the American adventuress Beryl Helliwell.  Beryl is in rather a need of a change herself.  She’s lived an exciting life that has made her the toast of newsreels, left a trail of ex-husbands, and now she wants a bit of quiet.  Returning to America right now doesn’t sound appealing, what with Prohibition and all, so Beryl decides to pay her old friend a visit.

The arrival of so notable a personage in little Walmsley Parva sets off all sorts of speculation, so Beryl decides to make the most of it. She pays a visit to Prudence, the most notorious gossip in town, and implies that she and Edwina are actually undercover agents and that Edwina’s apparent poverty was just a cover.  Now they are investigating a case right in the village, but Beryl is not at liberty to divulge details.

What was meant as a lark turns deadly serious when Edwina is attacked and a girl meets with an untimely end.  It seems that Edwina and Beryl really do have a case to solve, preferably before the body count rises.

This is a first in series book, but the author skillfully introduced characters and never allowed the story to drag.  There’s a bit of humor, warmth of friendship, good characters, and I enjoyed the 1920s English village setting.  Downton Abbey fans will find much to like, but this book would be a fine choice for anyone who enjoys a British style cozy.
Posted by BPL Ref at 12:08 PM