The Expanse series by James S. A. Corey 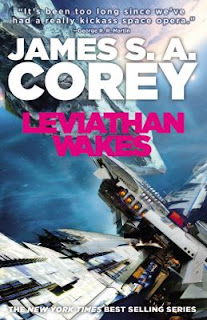 Good science fiction really draws me in and keeps me reading, watching, and/or listening.  It’s not so much the androids, space battles, or alien worlds which bring me back, but the characters.  Recently I’ve been using Tennessee READS to listen to audiobooks in the Expanse series by James S. A. Corey (a pseudonym for writing partners Daniel Abraham and Ty Franck.)  I have found the characters so engaging that I don’t always turn off the stories when I pull into the driveway, but continue listening while cooking dinner, feeding the cats, or doing other household chores.

In the Expanse universe, humans have managed to escape the gravity well of Earth, put colonies on the moon (Luna), Mars, and several outer moons and space stations.  Traveling to other stars is still a stretch of the imagination, but people are working as hard as they can to find a way.  Alien presence in the universe makes itself known even here within our solar system, but in the form of molecules and long abandoned gateways, not as bug-eyed figures intent on destroying Earth.  As passageways to new worlds are found, alliances swiftly change as planetary governments and corporations race to plant their flags in the soil of newly discovered planets.

The series follows the exploits of a small crew based on the spaceship Rocinante for most of the series. (This is a tiny spoiler, since they transition to the ship and rename her during the first book, Leviathan Wakes.)  James Holden takes charge and the rest of the crew is made up of engineer Naomi Nagata, mechanic Amos Burton, and pilot Alex Kamal.  Various other characters move in and out of the picture, but these four individuals form a crew committed to working together.

Some of the other interesting characters include Fred Johnson, head of the Outer Planets Alliance; Detective Miller, intent on tracking down the missing girl Julie Mao; Bobbie Draper, a Martian ex-Marine, and Chrisjen Avasarala, an Earth based UN bigwig who wants what she wants when she wants it, and liberally sprinkles her demands with four letter words, despite being described as a tiny little old lady.  I have found myself laughing out loud when Avasarala pops up on the com screen or strides into the room.

George R.R. Martin calls the books “Interplanetary adventure the way it was mean to be written,” which of course is proudly displayed across the front of the paperback editions.  The series has also been adapted to the small screen by the SyFy channel, currently in the third season.  DVDs for the first two seasons of The Expanse are coming soon to the Bristol Public Library.  I can’t wait.

Including full length novels and the occasional shorter e-book/audio novella, the series titles are: