How to Be Interesting (In 10 Simple Steps) by Jessica Hagy 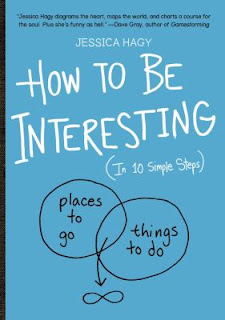 One reason I like BPL Book Bingo (new round starting soon!)  is that it encourages me to read books I would not have read otherwise.  One of my few remaining spaces was “Read a self-help book.”  My first choice was The Life Changing Magic of Tidying Up by Marie Kondo but after only a few pages I realized in this case I was beyond help. I decided that perhaps I could learn to be interesting instead.

Also, the book had pages with short text and large diagrams.

It turns out that the entries started as blog posts for Forbes magazine. The ten steps form chapters with a theme, or rather a piece of advice, which is explained within the chapter.  For example, the first section is “Go Exploring.” There are diagrams and hints that follow that piece of advice, including “Unplug,” turning off devices and talking to people that you meet while you explore a new place sans map. Open yourself up to new experiences and take the risk of looking silly or being embarrassed.

Sure, all the advice is relatively simple but I have to admit I didn’t ‘get’ some of the diagrams. I’m going to file that under "take the risk of being embarrassed."  I also had reservations about some suggestions like “Shower in the dark.” While one part of me thought it would be an interesting sensory experience, another part thought it would be a good way to end up in the ER.

But I understand where Hagy is going with all this and I rather like it.  She’s not saying to make drastic and unsustainable changes, but to make small ones.  To listen to others, to speak up for ourselves.  To try a food we’ve never tried before. To turn off the noise for just a little while.  To take a walk. To look at the world and really see it instead of being lost in our own thoughts. The simple, concrete suggestions are achievable—well, maybe not that shower in the dark thing—and might indeed make life (and us) more interesting.
Posted by BPL Ref at 12:45 PM

Email ThisBlogThis!Share to TwitterShare to FacebookShare to Pinterest
Labels: blog, diagrams, How to be Interesting, Interesting, Jessica Hagy, self-help