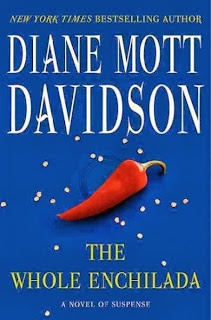 Diane Mott Davidson has created her own little universe in Colorado with the Goldy Schulz series.  Goldy, a caterer, has the usual amateur sleuth habit of sticking her nose where it does not belong, and often endangering herself as a consequence.  After the first couple of books in the series, she marries Tom Schulz, local policeman (thus freeing herself from the unfortunate appellation “Goldy Bear”, owner of  Goldilocks Catering, “where everything is just right.”)

The Whole Enchilada is the 17th installation featuring Goldy Schulz.  In this outing, Goldy’s old friend Holly collapses and dies immediately following a birthday party for their teenage sons.  Holly had been part of their support group—dubbed “Amour Anonymous—for abused wives along with Goldy and Marla.  Soon, Goldy is digging through their past memories, as well as interviewing hairdressers from more than a decade earlier.  Goldy herself is put in danger as she is injured by someone’s sabotage, then physically attacked, and then someone who looks like her is killed.

I don’t recall that Holly was ever mentioned in any of the earlier books, so it was a little strange to have a new character show up who had obviously been important to Goldy in the past.  This was just one of the things that I felt the author was trying to layer on to Goldy’s history, in order to have one more acquaintance, friend, or business associate to be murdered (thus making Goldy’s emotion and involvement in solving the crime slightly more believable.)

I found it a little hard to believe that Goldy had actually taken notes during the “Amour Anonymous” meetings, therefore leaving a written record that she could now try to reconstruct into clues as to who might have wanted Holly dead.  This seemed like an awkward device to introduce clues as Goldy and Marla are digging through old notebooks in Goldy’s basement.  Other clues are disclosed by riddles that Holly had woven into her artwork.  It just seemed a little far-fetched to have these clues sitting in plain sight just waiting to be interpreted.

Of course, Goldy always gets her crook, being given leeway by her law-enforcement husband and all others around her.  This is not a spoiler, just what readers can always expect from Goldy.

While not giving too much away, I will say that the end of the book ties up several story lines and takes Goldy through some major life changes.  Of course this makes me wonder if this could be the end of the series.  Could this be true?  Perhaps it is time for Goldy to live happily ever after as the sun goes down on her Colorado town.  Perhaps she is simply beginning a fresh chapter in her sleuthing life.  Loyal fans will just have to wait and see.
Posted by BPL Ref at 9:24 AM