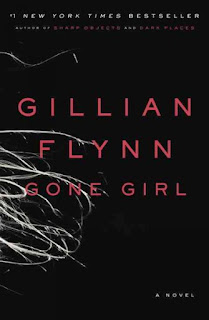 Gone Girl by Gillian Flynn gives us the story of Nick and Amy Dunne, a New York City couple deeply immersed in the good life. Amy is beautiful, Nick is handsome, and they are both witty and intelligent. They are magazine writers able to live beyond their obvious means due to the fact that Amy has a trust fund.

Everything is fine for them for the first few years. Actually, it is beyond fine, it is pretty much the stuff of fairy tales. BUT, then the economy goes down the tubes, the internet snuffs out printed magazines, and suddenly each of them is unemployed. I found a line from a Billy Joel song running through my head repeatedly: When the fun falls through and the rent comes due.

That’s what happened to these two. The fun fell through, the money went away, and they were left with nothing but each other, only to discover that this wasn’t enough. Ha! Not only was it not enough; it was too much.

A series of events pushes them away from New York and to Missouri where Nick has family. I do not want to reveal the events as I fear it would give away too much. Suffice it to say the die is cast.

A mystery develops, and this is one of those books that causes you to repeatedly ask yourself "What is going on? Who is the bad guy here?"

I found myself feeling unsympathetic towards both of the primary characters. Enough so that I considered putting the book down, thinking "I don't like these people, I don't care about them, I don't care who did what or how this turns out."

But did I put it down? No, because somehow I was strangely hooked. As I read, I discovered that I did like one of the characters much more than I had thought, and I found myself rooting for that character. After a time I found that I could hardly put the book down.

There are twists and turns right up until the final pages. I am not promising an ending to this saga that will seem pleasing to you. Upon completing the book, my first inclination was to find the nearest river and throw the book into it, but I couldn’t allow myself that, since the book belongs to the Bristol Public Library.


Gillian Flynn, author of two previous thrillers, Sharp Objects and Dark Places, has produced a real page-turner. If you want to escape your own life for a while, neglect your domestic and professional duties, stay up too late reading, etc., this a book you should check out.