Nevermore was its usual eclectic self this week, albeit with a tad more popular fiction:

Monday Mornings, the new novel by Sanjay Gupta, takes its title from the routine Morbidity and Mortality conferences held at the hospital each week, in which doctors discuss medical errors.  The idea is for the physicians to learn from their mistakes and the mistakes of colleagues, in order to better treat patients.  The novel follows a group of neurosurgeons in an exciting, behind the scenes look at life among the top doctors.  Personal dramas as well as medical ones unfold.  This one is recommended for anyone who likes a good medical novel with a dash of soap opera. Gupta is himself a neurosurgeon and author of several nonfiction books on medicine. 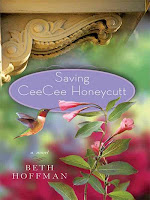 Saving CeeCee Honeycutt by   Beth Hoffman was highly recommended by one of the Nevermore readers.  Twelve year old Cecelia (“CeeCee”) knows that there is something wrong with her mama, but this is the 1960s and mental illness isn’t discussed except in whispers.  Her father travels a great deal and seems to have little or no interest in CeeCee when he’s home.  When Mama is run over by an ice cream truck, Great Aunt Tootie comes to Ohio to take CeeCee back to Savannah with her.  This is a warm and ultimately hopeful story with memorable characters, and a treat for those who like authors like Fannie Flagg or Ann B. Ross.

Another member was reading and enjoying Bill O’Reilly’s Killing Lincoln:  The Shocking Assassination that Changed America Forever.  O’Reilly tells the story as if it were a thriller, which makes the book more of a pager-turner than a scholarly book on the subject. It has earned praise for being an entertaining way to learn about a pivotal moment in American history; several reviewers on Amazon commented that it read like a novel but that there should have been a bit more fact-checking and proofreading before it hit print. It has been very popular here at BPL, making the list of most reserved books for several months.

And speaking of the Civil War, the Bristol Public Library will be hosting Dave Goetz, a  Civil War researcher who is co-authoring a book on John Singleton Mosby.  Mosby was a highly successful guerilla leader for the Confederacy whose post-war support of Ulysses S. Grant was seen by Southerners as a betrayal.  The presentation will be on Saturday, May 19, at 1:00 pm.
Posted by BPL Ref at 4:14 PM