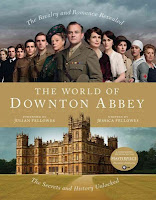 The World of Downton Abbey by Jessica Fellowes is a treat for any fan of PBS’s “Downton Abbey” series.  While this is a “behind the scenes” book, it isn’t a gossipy one about the actors, though some offer comments about working conditions or how they see their characters. Nor is it a novelization of the series, though it does discuss some of the storylines and gives an historical and social context for events.  Most of the book is devoted to explaining a way of life that’s very different than most of us have ever known, where even the slightest misstep can ruin one’s prospects for a job or a marriage.  For example, Cora was an American heiress who married Lord Grantham, something that was not uncommon at the time: because American laws of inheritance allowed daughters to inherit their fathers’ wealth, such girls were sought after by cash-strapped English nobles who might have land and houses but not the wherewithal to keep them up.  The Americans received titles and social status in return, though some found the reception by English society to be chilly in the extreme.  Whether or not the couple was in love was largely irrelevant.
In the servants’ hall, there was another social hierarchy at work.  Servants who attended the family in personal matters—the master’s valet or the ladies’ maids—were higher in social status than, say, the kitchen maid.  Relationships between servants and between servants and families were quite regulated; familiarity was not generally tolerated, though the book does detail some circumstances in which the barriers were perhaps bent a bit.
The book does discuss the backgrounds of some of the characters in more detail and details some of the changes in the society caused by the Great War. It will make watching the next season—or rewatching seasons one and two!—all the more enjoyable when you to look for certain details in a scene.  Fellowes quotes from contemporary sources to flesh out some of her assertions, and uses examples from real-life situations to help explain some of the events of the series.
The photographs of the sets, costumes and of course the incredible Highclere House (which stands in for Downton Abbey) are a visual feast.   I highly recommend this book for fans of the series or for anyone interested in that era of British history.

Also recommended is Lady Almina and the Real Downton Abbey:  The Lost Legacy of Highclere Castle by the Countess of Carnarvon.   Almina, a daughter of industrialist Alfred de Rothschild,  married (or was married off to) the fifth Lord Carnarvon; as with the fictional Lady Cora, Lady Almina brought badly needed cash as part of her dowry while picking up a title and additional social access and respectability for her family. Much of the book is devoted to the World War I era when Lady Almina opened Highclere as a hospital for wounded veterans.  There is a wealth of background material, since the author has access to the Highclere archives; and she doesn’t limit the text to the family but includes information about the staff as well, though more in the form of their duties, wages, etc. There was a famous “shooting party” when the Prince of Wales (the future Edward VII) visited Highclere and was afforded a lavish reception.  The period details are astonishing, from the redecorating for the visit to the cost of the food.
(Note:  the 5th Earl of Carnarvon helped finance Howard Carter’s Egyptian excavations, which included the discovery of the tomb of Tutankhamen.)

Last but certainly not least is the reprint of Margaret Powell’s memoir of being a servant in one of the great houses.  Below Stairs is often credited for being the inspiration behind “Upstairs, Downstairs,” the groundbreaking British series that took as much interest in the lives of the servants as it did the family they served.  With the popularity of “Downton Abbey,” the book has been rereleased and is once again a best-seller.  If you’re interested in a real behind the scenes peek from a servant’s point of view, this is the book for you.  Powell was an ambitious woman who started as a kitchen maid but who didn’t intend to spend her life in service.  Intelligent and well read, her tart observations can be a revelation to modern readers.
Posted by BPL Ref at 1:16 PM