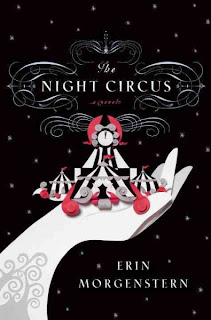 Reviewed by Jeanne
There is a magician who is not an ordinary magician who uses sleight of hand and misdirection but a genuine magician.  He calls himself Prospero the Enchanter and he makes real magic on stage, but convinces the audience they are watching an illusion—a most excellent illusion, but an illusion nonetheless.  One day he receives a letter-- actually a suicide note --and along with it, a child whom he is told is his daughter.
He is not pleased.
Then after a disparaging remark about her mother, the child shatters a teacup without touching it.
“You might be interesting after all,” he tells her.
Soon he contacts another man, also a magician, to propose that they restart their competition.  The other man agrees, but warns Prospero that he must be prepared to lose—and that means losing his daughter.
So begins The Night Circus by Erin Morgenstern, a mesmerizing story of love, loss and magic. It’s been called “Hunger Games meets Harry Potter” in an effort to convey the competitive storyline with magic, but that does a severe disservice to this beautifully written book.  The descriptions appeal to all the senses, but especially vision; it’s no coincidence that the first time author is also a visual artist.  Each magician has chosen a champion, but neither contestant knows the other. The weapons are not psychic punches or bolts of lightning but creations.  The field of battle becomes the Le Cirque du Reves, the Circus of Dreams.  The tents are black and white striped; the confections like nothing you’ve ever tasted; and the circus is only open at night.  There is no advance warning, no advertising.  The circus is just there one morning, and then one morning it is gone. Sometimes it’s hard to remember if it was really there or if it was just a half-remembered dream.
It is here that the game is staged.  Marco and Celia are the players, though at first neither knows the other nor do they know the rules of the game.  Their task is simply to create something wonderful within the confines of the circus, each seeking to outdo and delight the other. There are a number of fascinating supporting characters, including Isobel the fortuneteller who loves Marco; Bailey the farm boy who longs for the day when the circus will return;  the red-haired twins who were born just as the circus opened and who seem to have absorbed some its magic; the enigmatic contortionist who may know much more about the circus and the game than do Marco and Celia; and all the others who help make the circus happen for reasons they don’t quite understand and who are sometimes unwitting players in the game.
The book brims with imagination and lyrical language. It’s playful, romantic without being soppy and, frankly, enchanting.  The story shifts about in time a bit, but the atmosphere remains firmly rooted in the late Victorian/Edwardian era with gas lights, fog, and a sort of Art Nouveau vibe.  I didn’t find it to be at all pretentious but rather playful and elegant at the same time.
I have compared this book to another of my favorites, Garden Spells by Sarah Addison Allen, even though the plots are very different. Both books show me a world slightly outside the real one, with people I like in a world dusted with magic. Both pull me in and while I’m satisfied at the end, I’m a bit sad because I’m going to miss these people and places. Best of all while both are light and sweet confections, I don’t gain a pound.  Well, except for all those chocolates I ate while I read them.
Posted by BPL Ref at 5:50 PM