Explosive Eighteen is a dud! 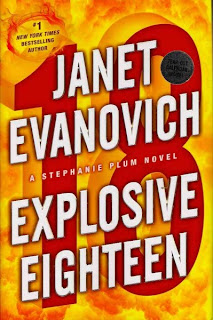 Explosive Eighteen by Janet Evanovich, reviewed by Doris
Did I say after reading Janet Evanovich’s Smokin’ Seventeen that I was done with the series? Well, I lied. I suckered myself into reading Explosive Eighteen.  Yes, I was on pain meds for a sore knee, but that is no excuse for such a dismal waste of time.
In the first few books of the Stephanie Plum series, there was humor. Grandma Mazur made me laugh, and her obsession with attending funeral home visitations reminded me of my dearly loved aunts who like to discuss who died this week. Stephanie’s struggles to learn the bail bond apprehension business were also amusing and flaunt with misadventures reminiscent of Lucy and Ethel gone bad. Lula the ex-hooker as Stephanie’s sidekick was always good for a laugh for no other reason that her clothing. And, of course there were Ranger and Morelli.  Ranger is the gorgeous mystery man who may or may not be totally on the side of law and order who calls Stephanie “Babe.” Morelli is the gorgeous neighborhood bad boy who grew up into the homicide cop who definitely is one the side of law and order and who calls Stephanie “Cupcake.” Stephanie’s eternal dilemma—which gorgeous man does she want in her bed and her life forever after?  Since this series has continued long past its expiration date and we have discovered that Stephanie has the brains of a deranged poodle, I no longer care which of these men she wants. I just want to know why they want her! (Just on a personal note here: I would much rather be called “Babe” than “Cupcake.”)
Explosive Eighteen follows the formula Evanovich established in the first book. Stephanie and Lula go to apprehend some miscreant. Along the way they have to eat twelve times and always at least once at the Cluck-in-a-Bucket. Then their car gets blown up or burned up or stolen. Stephanie calls Ranger. He comes and saves her worthless hide and gives her a new car to destroy. It’s kind of like eat chicken, tazer someone, Lula tries to shoot someone, the miscreat escapes, Stephanie whines, everyone goes over to Stephanie’s parents’ house for dinner, her mother drinks (so would I if this were my child), Stephanie pouts her way into to bed with one or the other of the gorgeous men available and then feels great guilt, yadda, yadda, yadda. There’s always some meandering mystery that really is not a mystery but which gives Morelli something to do besides be exasperated with Plum. Comments are made about Stephanie’s cousin and boss Vinnie who had a romantic encounter with a duck, buses explode, cars burn up, and Stephanie’s mom looks longingly at the bottle of Scotch. In this case, the man seated next to Stephanie on the return flight from an ill-fated vacation in Hawaii turns up dead. Everyone thinks he gave Stephanie something of great value, so she has Russian mob people, a really bad hairdresser, and various and assorted other criminals after her. While she tries to muddle through her latest romantic disaster and avoid getting killed for the valuable object she really doesn’t have, it is of course Ranger who comes to her rescue time and time again.
It is time for Evanovich, Morelli, and Ranger to move on. Stephanie Plum has to be one of the most incompetent, sniveling, whinny so-called heroines in current fiction. Whatever humor there was is the series died a slow, painful death on the plain of beaten to death. Unless you too have a sore knee and are pain meds, find something better to read over the holidays.
Posted by BPL Ref at 9:41 AM