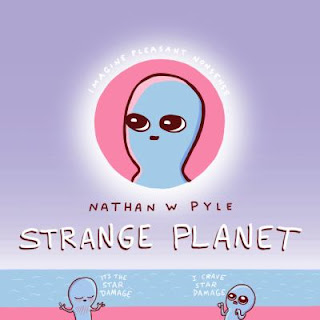 Some months ago I started seeing some amusing comic strips featuring blue alien-like beings with big eyes and an interesting way of expressing themselves. Part of the fun was figuring out what they were talking about; for instance, a group gathered around a screen saying, “Catch the orb, we implore you!” is probably watching a ball game.   Another one has two aliens blowing up balloons aka “elastic breath traps” in order to celebrate a festive occasion.

I have to admit I was hooked pretty much immediately and looked forward to more.  Apparently I wasn’t the only one because two collections of the strips have been published as books.  Small books, but then sometimes good things come in small packages. (Pause while I try to figure out how that would be expressed in blue alien speak:  Items of delight may appear in less than medium sized containers, maybe?)

Anyway, the strips rather remind me of the old Coneheads sketches from Saturday Night Live but more innocent and sweeter. Maybe it’s the color palette in part, but these beings warm my major blood pumping organ.  They’re gently curious, trying to understand encounters with new beings (while holding a cat-like creature one exclaims that it is vibrating) and making the readers look at human customs from a different perspective:  peek-a-boo, birthday cakes, and ordering pizza (vast dough circle with extra fungus) will never be the same. Neither will the “Itsy Bitsy Spider” song.

And yes, there is also a dog creature, albeit one with three eyes.

I found some of the strips to be laugh out loud funny (the eye exam sequence for one) but all at least made me smile.

And isn’t that just what most of us need right now?

In closing, I will give the traditional October salutation:  Suffer mild harassment or give me sucrose. 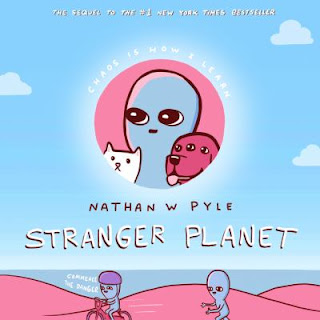