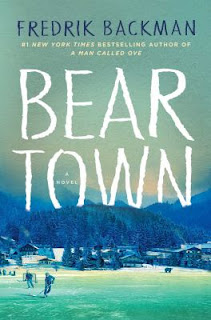 Beartown is a small community whose ice hockey A-team was second in the nation about twenty years ago, but still carries the pride of those days. One member of that team even went to play in Canada in the NHL for a while.  Now, with jobs dwindling and no tourism or industry—or as one character puts it all they have is “darkness, cold, and unemployment”-- Beartown once again has pinned its hopes on ice hockey.  They have a great team, a team that might just make it into the championship round and bring a new rink, new training facilities, and new life to Beartown.

Then there is an incident which tears the town and the team apart.  Can Beartown survive?

I may have mentioned a time or twelve that I love Book Bingo because it encourages me to read books I might not pick up otherwise.  That was the case with the first Backman book I read, A Man Called Ove (and which I loved) and so it was with the second when the square told me to read a book about sports.  I don’t hate sports, I just don’t know that I like to read about them all that much.  And then I remembered that Backman’s Beartown was about ice hockey.

Backman has a deep understanding of his characters and is an artist at revealing them to the reader, giving each one multiple layers and facets.  There’s a full cast here indeed:  Peter, the former champion, who has returned home to help the town win again, bringing with him his attorney wife and two children, bright Maya and her younger brother, Leo; Kevin, the new golden boy who may bring glory to the town; Sune, the old man who has coached the A-team for decades but who knows that he’s going to be pushed out; and Amat, whose mother immigrated to Beartown and works as a cleaner so that her son can have a better life and play this game that he loves with all his heart and soul.  There are numerous other supporting characters who can seem overwhelming at first, but they all have important roles to play in the drama.

What I love about Backman’s writing is that his characters aren’t often predictable.  Some who seem unlikable at first may emerge as heroes while the seemingly sympathetic person turns out to care more for his own agenda than for the greater good.

More than anything, this is an examination of human character and society and made a much greater impression on me than I would have imagined.  There are some things that I may quibble with—Backman likes to leap forward to the future and occasionally tantalize his audience with hints of what happened to a character—but I also have to admit those make for memorable impressions.

If you like tough stories well told, peopled by fully developed characters, moments when you will cringe and cheer, and an exploration of both the light and dark in human beings, then by all means pick up Beartown.  You may even want to try the sequel, Us Against You, which continues the story of some of the characters.  A third book is in the works.