From Scratch: A Memoir of Love, Sicily, and Finding Home by Tembi Locke 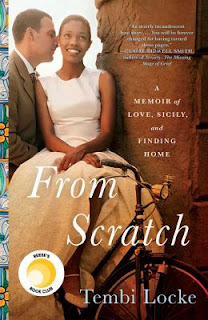 As a twenty year old college student in Italy, Tembi Locke was infatuated with the country, the art, and with the handsome Italian men.  There was one, however, who made her a bit uneasy—not because she thought he was dangerous, but because she was afraid he wouldn’t be a casual affair.  She was right.  Saro turned out to be the love of her life, but their time together was short.

I’m not giving anything away by saying that, because the book opens as Saro is dying. Locke writes movingly of how she stayed by his side, trying to bring whatever comfort she could. Their story isn’t told in a linear fashion, but I didn’t have any trouble keeping up.  For me, the heart of the story was the question of how – or if—their relationship would be accepted by Saro’s traditional Sicilian family.

Thanks to a novel I had just read, I was aware that Sicilians are a law unto themselves.  Their land is beautiful but harsh; as a result they are deeply clannish.  Saro had a previous relationship with a girl from Sardinia, and his family had taken a very dim view of her.  Tembi is a black woman from Texas—what chance is there that they will accept her?

On the way to romance, we learn a lot about Tembi’s family as well: activists and over-achievers who broke barriers and cleared the way for Tembi to follow her dreams of becoming an actress. Saro is supportive, willing to uproot himself and move because as a chef he could work anywhere; but Locke would need to be in America to achieve her dream. (Interestingly, while she does earn a certain amount of success as an actress, that plays a very small part in the story.)

From the very first pages, food, taste, and flavor are woven into their story.  As Saro is dying, Tembi has ice pops at hand, ready to give him a cooling taste at any moment.  The descriptions of food are glorious and complex; from fresh almonds to fennel, from making cheese to growing fava beans.

This is a story of love and grief and food and home, all mixed together.  I wouldn’t call it a tear-jerker, though Locke describes the depth of her pain; it’s more about coping, creating a family, and finding your place in the world.  I hesitate to say I enjoyed the book since it deals with grief, but in all honesty, I did.
Posted by BPL Ref at 11:21 AM