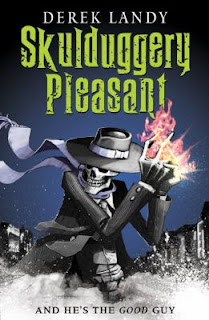 Reviewed by Ambrea
Stephanie Edgeley has lived in a rather quiet life in a small, quiet town with parents who are quietly unextraordinary.  Nothing ever seems to happen, until the death of her uncle, Gordon, turns her world on its head and throws into some strange company.  You see, Gordon made some very unusual friends while he was alive—friends who have suddenly become Stephanie’s very unusual friends, much to the consternation of her viperous aunt and her onerous uncle.

Skulduggery Pleasant is a talented detective, a first-rate sorcerer, and a snappy dresser to boot—oh, and he’s also a skeleton.  Stephanie, now drawn into his dark and dangerous world, must confront an ancient evil and stop a malevolent necromancer from wreaking utter havoc upon the world.  But that’s all in a day’s work for Skulduggery and his unusual crew.

Witty, charming, endearing, smart—all adjectives that Skulduggery would use to describe himself (if asked), but I find they apply nicely to Derek Landy’s novel.  Although I believe it falls on the spectrum of children’s/adolescent fiction, I truly enjoyed Skulduggery Pleasant for its wit and its captivating characters.  It’s written with a younger audience in mind, so, of course, the language and humor reflect the age of the reader; however, it’s a well-written novel that’s lively, entertaining, and singularly unique.

First and foremost, I should point out that I absolutely adored Skulduggery Pleasant himself.  (Naturally.)  Stephanie is a clever, quirky character and she makes one heck of a heroine—she’s a tough, intelligent girl who manages to take the idea of magic and animated skeletons in stride—but, let’s be honest, it’s difficult to top a walking, talking, flame-throwing magical skeleton like Skulduggery.  Especially with him being such a snappy dresser and witty conversationalist, and what not.

I also enjoyed the story.  Skulduggery Pleasant has a standard good-versus-evil plot.  Simple, predictable, but ultimately effective, it’s a familiar story arc that can’t go wrong for readers.  However, Landy manages to add layers of richness and complexity by creating intriguing characters—some horrific, others heroic—and, more importantly, putting an entirely new spin on fairy tales, myths, and all sorts of paranormal critters.  He’s careful to craft his story by giving his characters distinctive backgrounds and drawing on Skulduggery’s deep, dark and mysterious past to shed light on a conflict that’s centuries in the making.  It’s frightening, it’s violent, but it’s also riveting to see how Skulduggery and Stephanie will stop at nothing to take Serpine down before he destroys the world.

Overall, I categorize Skulduggery Pleasant as an excellent book.  Amusing and sly, it has an unexpected sense of humor that appealed to me and frequently made me laugh aloud.  Sometimes, I noted the story did take a serious tone:  Skulduggery, for instance, is a skeleton and it isn’t much of a stretch to guess he suffered some horrible fate before he came to know Stephanie.  But, for the most part, Derek Landy’s novel is a fun, rollicking novel that jumps headlong into a strange and scintillating world beneath our own.
Posted by BPL Ref at 10:24 AM