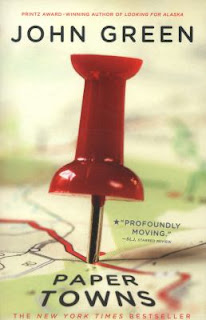 Quentin Jacobsen fell in love with Margo when they were both nine years old, and he has spent an entire lifetime loving from afar the magnificent and adventurous girl known as Margo Roth Spiegelman.  Then, one night, Margo appears at his window.  Dressed like a ninja and harboring a rather inspired plan for vengeance, Margo pulls Quentin into an adventure the likes of which he’s never experienced—a night that he’ll never soon forget.

When Quentin arrives at school the next morning, he finds that Margo has disappeared:  she loved mysteries so much, she finally became one.  But Quentin learns that Margo left clues behind—a poster in her window, a highlighted passage in a poem, a vinyl record—which leads him down a winding path to graduation and beyond, a path that will ultimately lead him to an answer he didn’t foresee.

I liked Paper Towns, and I absolutely loved Quentin.

Quentin is a good person:  he tries his best at school, he has a good group of friends, he has a great relationship with his parents, and he has plans for his future.  And I like him precisely because he is a good person.  Granted, he’s not infallible and he certainly isn’t perfect, but he’s a good person and he’s trying his hardest to be a good friend.

Quentin also has a unique voice.  Like all narrators in John Green’s books—Miles in Looking for Alaska, Hazel from The Fault in Our Stars, Colin from An Abundance of Katherines—Quentin is a gifted storyteller and narrator.  He’s smart and thoughtful, making connections and finding clues from Margo that no one else managed to find, let alone decipher, and he’s an enjoyable narrator.  He’s intelligent and introspective; he’s precise and clear.

He is the type of narrator who manages to ensnare me in his story, precisely because he knows how to tell his story.  He knows how to keep me involved in the journey—and I was enthralled the entire time.

However, I found I was considerably disappointed with Margo Roth Spiegelman.  Although my impression of Margo was colored by Quentin’s adoration , I had a sinking suspicion as I read Paper Towns that she was not the wild, adventurous and amazing girl he—and, well, everyone else—considered her to be.

And, unfortunately, I was right.

I understand why John Green concluded Paper Towns as he did.  I see why he had to destroy Quentin’s—and, by proxy, my—understanding of and expectations for Margo.  She became a mirror, like Quentin discovers, reflecting the thoughts and ideas and feelings of all those who knew her (including readers), and Green had to shatter that mirror in order for us to see the real Margo.

I understand; however, I could have finished Green’s novel without ever finding out what really happened to Margo Roth Spiegelman.  It would have spared me the heartache.
Posted by BPL Ref at 10:43 AM