Recently, The Tales of the Lonesome Pine Bookstore in Big Stone Gap offered some 50s B-Movies of the horror genre for sale.  The lurid covers probably prompted many laughs, but for me they prompted memories.

When I was about five, I saw my first horror movie more or less by accident.  The monster was absolutely terrifying and it seemed nothing could stop it.  I cried for hours and had to sleep with a light on for months afterwards.

The movie was The Blob.

I decided to check out the library’s copy of The Blob to see if it was as silly as people said it was.  For those of you unacquainted with this, the first starring role for a young Steven McQueen, the plot revolves around a meteor that falls to earth with a sort of gelatinous substance inside.  A bit of it gets on the first person to encounter the meteor, and gradually consumes him, leaving no trace behind.  It grows larger and then proceeds to threaten the town, though no one knows this except for some teenagers who try to convince the authorities that there’s danger. 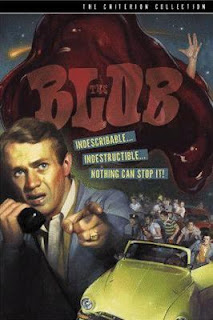 Yes, it was somewhat silly.  Mostly it was the squeaky clean juvenile delinquents (think less menacing versions of the kids in West Side Story) and the earnest performances from everyone.  The Blob itself is, well, a blob but I can see why it terrified me so:  it can ooze through vents as it does at a local theatre or under doors, and then it simply engulfs the person.  Even if it looks like a mass of quivering strawberry gelatin, it meant business. And apparently I'm not the only one who has memories of The Blob:  Phoenixville, PA, site of some of the filming, has a BlobFest every year.  One highlight is the "Run Out," in which festival goers re-enact the scene where everyone flees the theatre.

So my repeat viewing of The Blob was well worth it.  I still think some of the 50s horror flicks had an innocent charm, for all the inadequate special effects and wooden acting, and occasionally some really neat moments.  Take a look at some of the photography for Creature from the Black Lagoon, for example, or when the Incredible Shrinking Man tries to fight off the spider. (We will not discuss the part with the cat. Just remember, if you are a mouse-sized human, to a cat you are still a mouse.)

Another old movie I’d love to see again was The Monolith Monsters, in which a meteorite falls to Earth yet again, but this time producing stones that grow, then fall and shatter scattering pieces everywhere that then begin to repeat the cycle.  It may not sound that scary, but the idea of these towers of black stone falling and crushing all in their path was definitely unsettling.

The one that scared me that I’m usually loath to admit is The Head that Wouldn’t Die. A scientist who adores his fiancé is shattered when she’s decapitated in an auto accident, so he takes the head back to his lab where he keeps it alive as he searches for a suitable body.  I don’t know what was wrong with the one left back in the car, but I digress.  The head was able to talk and make her distaste known about the unnatural state in which she was being kept even as her boyfriend courts women with suitable figures.  The lab also came equipped with an earlier experiment which was kept behind a locked door.  Bellows of rage could be heard, and a huge arm would grope from small opening, as well as some pretty heavy pounding as it tried to escape.

Which it does at some point, but I couldn’t tell you what it looked like because I was so terrified of what I thought it might be that I was always too scared to look.

I was also creeped out by a Japanese movie, Attack of the Mushroom People. My memory of it is hazy, but there was a group of folks who were on a boat near an island.  It was very atmospheric as I recall, with swirling fog and and jungle.  I started watching it to laugh, but it was oddly compelling.

And what childhood would be complete without the terror of Alfred Hitchcock’s  The Birds? In fact, that’s going to be the next oldie but goodie that I check out from the library.

So there are my guilty frights and pleasures.  I’d love to read about some of yours.

And Wendy at Tales of the Lonesome Pine—if that copy of Carnival of Souls is still there, I’m  interested.  I’ve heard  enough about it to be intrigued, as it’s a title that always seems to pop up on “Bad Movies But We Love ‘Em” lists.  Got a copy of Plan Nine from Outer Space?
Posted by BPL Ref at 9:14 AM