The Murder Room by Michael Cappuzo 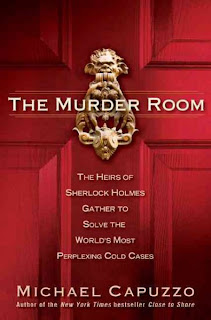 Reviewed by Jeanne
Eugene Francois Vidocq was a Frenchman who spent much of his early life either in prison or evading the law.  He was a thief, a duelist, and forger, among other things.  Then he decided he was tired of being on run or in prison.  He tried to become a merchant but his past had a habit of catching up to him. Finally, he struck a deal with Jean Henry, the chief of police in Paris:  he would serve as an informant and in return he could stop running when released.  He proved an invaluable resource; so much so that he later formed an influential plainclothes police force to investigate crimes.  His methods were revolutionary, and he has become known as “the father of criminology.”  Vidocq inspired a number of fictional characters; most notable to modern audiences, perhaps, are Jean Valjean  and Inspector Javert of Les Miserables by Victor Hugo.
About 150 years after his death, a dedicated group of professional investigators formed the Vidocq Society. Membership is by invitation and limited to 150. The group includes police investigators, forensic pathologists, profilers, blood spatter experts and others whose skills give them an edge in solving crimes.  They only take cases by request and the case must be at least two years old.  They’ve had some extraordinary success stories and been the subject of numerous news stories.
To tell the story of this amazing group, Michael Capuzzo has written The Murder Room:  The Heirs of Sherlock Holmes Gather to Solve the World’s Most Perplexing Cases.  He concentrates on three of the founders (sculptor Frank Bender, criminal profiler Richard Walter, and Commissioner William Fleisher) and recounts some of their more memorable cases.
My admiration for the Vidocq Society knows no bounds.  These are truly dedicated people—people who really deserve to have a better book written about them.  There are sentences that lack coherence; repetitive phrases; cases are shuffled around in different chapters; and, saddest of all, some sensational but unsubstantiated solutions tossed in.   There should have been enough real cases with evidence and verdicts to fill the book without resorting to this.  The narrative is convoluted and disjointed.  At times I skipped ahead in the book to try to find the outcome of one case, because the author had decided to start recounting an entirely different case before revealing what happened in the first case.
If you can make it through the stilted prose (for the sake of your liver, don’t make a drinking game out of the use of “evil eyes,” “cold eyes,” or the ever popular “cold, evil eyes”), you’ll find a number of well known and not so well known cases recounted.  One of the better known is the John List case, the man who murdered his entire family and then vanished for nearly two decades, before Bender’s superb bust of what List would look like coupled with an excellent psychological profile by Walter led to his capture; another such case is that of Marie Noe, who for years was pitied as the mother who lost so many children to SIDS, but who actually had murdered them. A number of other cases are sprinkled in, including historical cases going back decades.
This book is for those who enjoy true crime stories and want insight as to how some famous cases were actually solved but be aware that the writing style can be a distraction.
Posted by BPL Ref at 3:21 PM