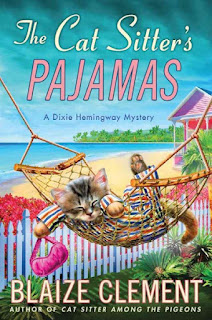 Reviewed by Jeanne
It’s no secret that I like light mysteries, preferably with cats and not just the real cats at my house who try to sit on the book as I read.  There are any number of these books, though some are just teases:  the artist slaps a cat on the cover and no cat appears in the book.  I’ve concluded that often a cat (or a dog, let’s be non-speciesist) is the artistic shorthand for “relatively non-violent, not a lot of explicit sex and not too much cursing.” Sadly, sometimes it’s also shorthand for “bland and formulaic.” Too many series books nowadays feature first person narration from a feisty if somewhat ditzy heroine,  who always finds herself involved in mystery, with a man or men she’s attracted to but either they don’t notice her or she’s trying to convince herself she’s not interested, attempts at snappy dialog, intriguing location, and some sort of quirky profession.
I’d heard good things about the Dixie (“no relation to Ernest”) Hemingway series, so I decided to give one a try.  Dixie is a former deputy who left the force after her husband and three year old daughter were killed in a traffic accident.  Her grief made her unstable as an officer, so she’s working as a pet sitter while she tries to get her life back together.  She lives with her firefighter brother Michael and his partner, Paco, in their late grandparents’ home on Siesta Key.
I didn’t think this sounded particularly promising.  In fact, it sounded a lot like all the things I just said I didn’t like but I decided to read the first book anyway. Why?  Because every now and then I’ll find an unexpected gem and that makes it worth all the digging.

I’m happy to report this was one of those times.  Clement has a feel for both characterization and pacing.  Dixie has her problems, but she’s also a tough, decent woman who has a strong sense of justice for the underdog (or undercat, as the case may be.)  While animals always figure into the plots, they aren’t excuses to get sentimental.  Dixie treats them as individuals and with respect, even the ones who aren’t exactly lovable. There are funny lines, but they aren’t forced and there’s no attempt to draw attention to them.  One of my favorite lines is “Since I love chocolate second only to crisp fried bacon, the devil could leave a trail of it and I’d probably eat my way straight to hell.”  I can relate. Also, Clement never lets the plot drag but moves things along at a brisk pace.  Even when there’s a bit of down time to enjoy hot coffee and crisp bacon, she manages to keep the story from dragging and there’s no sense that the author is stalling or padding the book—that’s a pet peeve of mine, and no pun is intended.

Siesta Key is wonderfully depicted. It’s a small island off the Florida coast, just about eight miles long. Snowbirds and tourists swell the ranks in winter, but the small number of permanent residents give the place a small-town feel.  After a couple of books, I was ready to visit there myself, have some of those extra crispy hash browns, coffee, and eggs at the diner even though I don’t really like eggs, and maybe meet some of the retired circus people who live on Siesta Key.  I certainly wouldn’t mind meeting Detective Guidry in his hand-made Italian suits or lawyer Ethan with his lovely manners and dark good looks.  There’s a bit of judicious cursing and the occasional risqué comment, but nothing too off color. Some of the murders are brutal but Clement doesn’t sensationalize.  In short, these aren’t  fluffy sweet cozy books; they have a bit of grit and sand in there.
Unfortunately, Blaize Clement passed away July 20, 2011 after, as her son John put it, “a year-long disagreement with cancer,” which makes me think that Blaize was a lot like Dixie.  I’m sorry we lost her so young.  The good news is that her son is going to continue the series, at least for a book or two.
The books don’t have to be read in order but if you are one of those who prefers to read ‘em that way then here’s the list:
1.       Curiosity Killed the Cat Sitter
2.       Duplicity Dogged the Dachshund (Note: if animal deaths bother you, be warned that some do occur in this book.)
3.       Even Cat Sitters Get the Blues
4.       Cat Sitter on a Hot Tin Roof
5.       Raining Cat Sitters and Dogs
6.       Cat Sitter Among the Pigeons
7.       Cat Sitter’s Pajamas
8.       Cat Sitter’s Cradle by Blaize and John Clement (2013)

To keep up with news, events and a countdown to the next book's publication date, visit the website:  http://www.dixiehemingway.com
Posted by BPL Ref at 11:26 AM