The first book discussed at the January 24th meeting of the Nevermore Book Club was Coffee is Good For You by Robert J. Davis.  As our director pointed out, seeing the title that way doesn’t really express what the book is about. For that you need to see the cover: 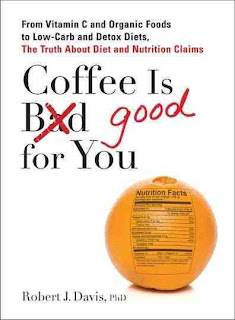 And quite a good cover it is, too!  Yes, the theme is the conflicting information we get every day about the foods we eat and whether or not they’re good for us.  Author Davis examines a number of these assertions and rates them on a “Truth-o-Meter” as to their validity. Does eating oatmeal lower your cholesterol?  Which is better, butter or margarine? The Caveman Diet or the Mediterranean Diet?   Lucky for the book club members, coffee did rate rather well, so we all drank ours without guilt.  We did not check to see what mentions there might have been of doughnuts, however.

The Street Lawyer by John Grisham got a good review from our reader who really liked the amount of legal information Grisham weaves into his books.  The plot has young lawyer Michael being taken hostage by a homeless man who claims he and his friends have been illegally evicted.  Although he’s rescued by a police sniper, Michael begins to wonder about the homeless man.  What he discovers will change his life forever.

Jo Nesbo, one of the new “Nordic Noir” authors, has had a new book published in the US.  The Leopard has detective Harry Hole called back to Norway after two young women are found dead.  It looks to be the work of a serial killer and since Harry has dealt with such killers before, everyone is looking to him to find the murderer.  Our reviewer reports that the book requires concentration, but is definitely one she wants to finish.

Three Day Town by Margaret Maron is the latest in the very popular Judge Deborah Knott series.  Deborah and her husband Dwight are on a belated honeymoon in New York City. They’ve been asked to drop off a package while they’re there, but before they can accomplish that task, a man is murdered and the contents of the package stolen.  This is a book Maron fans have long awaited, since it also features Sigrid Harald, who was the main character in Maron’s first series of mysteries. Our reader likes the way Maron writes and is enjoying this book, even though he’s never read any of the Sigrid mysteries.
Posted by BPL Ref at 4:00 PM