The Interdependency Series: The Collapsing Empire and The Consuming Fire by John Scalzi 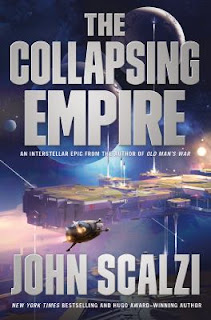 John Scalzi’s imagination is out of this world—literally. I recently reviewed his science fiction novel Redshirts where Star Trek-like characters assigned to wear red shirts were often on the receiving end of a phaser blast or the victim of some hungry alien creature. Scalzi’s humor shines through as he creates intricate plots and characters.

In the Interdependency, humans have used up the Earth and been forced to find other places to live. The artificial habitats and one single livable planet (called “End”) all depend on each other. Certain resources are available some places, and other things elsewhere. One place may produce all the citrus fruits available in the known universe, and another may have the perfect conditions to manufacture solar panels or self-sealing stem bolts. Humans have adapted to live underground, on rotating space stations with artificial gravity, and under domes.

But there’s a catch—humans haven’t mastered the ability to travel faster than the speed of light, but they have discovered a network which allows them to jump from certain regions of space to others. Think wormholes, but here it is called the Flow. Ships may enter the Flow at certain places and exit at others, so a trip which might take decades at sub-light speeds may only take a few weeks or months instead. It all depends on which stop you get on this interspace subway, and where you want to get off. The map is pretty much set, or at least it has been for the past thousand years or so. All roads connect to the Hub, so it’s a pretty important place within the Interdependency.

The Interdependency is ruled by the Emperox, using a gender neutral title rather than the old-styled Emperor or Empress. Originally a religious figure as well as a head of state, the Emperox has plenty of power, but usually manages his or her empire through a series of royal houses which have a monopoly on selling one thing or another—like all citrus fruit. Political maneuvering runs rampant; the matchmaking and intrigue rivals that of ancient European countries. Everyone who is someone has something to gain, and something to lose.

But then the Flow starts to change. Streams are collapsing, isolating colonies from the rest of the known universe. Only a few scientists are aware of the issues and the potential outcome. As they attempt to deliver that message to the Emperox, that’s where things get interesting. Cardenia Wu-Patrick is about to become the new Emperox and she is forced to hit the ground running as this looming crisis may change everything.

This may sound like I’ve given you the plot of the entire two-books-so-far-series, but I assure you that I’ve barely skimmed the surface. Scalzi writes brilliantly and creates incredible yet believable storylines filled with fascinating characters. The Collapsing Empire ends with huge questions hanging in the balance, but The Consuming Fire picks right up where the series debut left off. Both are available in the new fiction section of the Bristol Public Library. 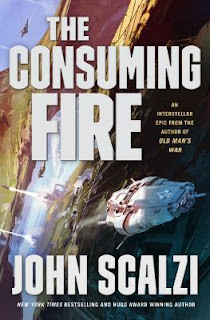 Bonus:  These titles fit our BPL Book Bingo theme this summer as we explore “A Universe of Stories.”
Posted by BPL Ref at 12:06 PM