Death at Whitewater Church : An Inishowen Mystery by Andrea Carter 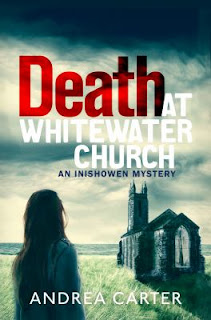 Irish solicitor Benedicta O’Keeffe accompanies Paul Doherty on a survey of Whitewater Church, an old and deconsecrated structure that the current owner is hoping to unload.  Crumbling but still impressive, Ben and Paul navigate the church and its environs, examining what they can with an inadequate map and rapidly fading light.  One feature not on the map is the crypt, which they discover by accident—and that there is one body left inside, reduced to skeletal remains.

The garda are called, and the remains are sent to the lab for identification.  Most seem to think that the body was that of Conor Devitt, a young man who went missing some seven years ago, just before his wedding.  It was before Ben had moved to the village of Glendara, but she quickly realizes that almost everyone she knows had some connection to Conor.  Intrigued, Ben tries to figure out the tangled web of lies and love to reveal what really happened seven years ago.

Andrea Carter grew up in Ireland and worked as a solicitor before becoming a barrister and then an author of crime fiction.  I was drawn to the book by the setting, which has a distinct Irish flavor without a “touristy” feel—i.e., she doesn’t try to have the characters speak in dialect or play up stereotypes—but Irish history does come into play, as characters struggle with the downturn in the economy and recall the bitter Troubles.

Ben is a well-developed character who is likeable and honorable, but also intriguing. She is painfully estranged from her parents, dreading to have contact with them though she feels guilty for avoiding them.  She has come to Glendara to escape things in her past which she isn’t ready to share with any of her new friends, not even Sgt. Molloy, the garda with whom she has become close.  The supporting players are also well done:  not a stock character in the bunch. Ben is still learning about most of them, and the discovery of the body serves to reveal much: weaknesses, strengths, and above all, secrets.

The plot was quite well done, and I found myself surprised several times. I enjoyed all the descriptions of the village and the church; the author conveyed the cold and wild beauty of the area, located in County Donegal on the Inishowen peninsula.

I would definitely like to take a return visit to Glendara.
Posted by BPL Ref at 9:17 AM