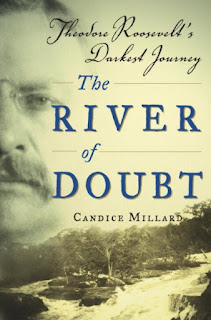 The BPL Book Club met Thursday, June 20 to discuss Candice Millard’s River of Doubt: Theodore Roosevelt’s Darkest Journey. Published in 2005, this national bestseller has received numerous accolades and our BPL Members had nothing but praise for it as well.
Reeling from defeat in his third presidential election, Theodore Roosevelt decides to do what he does best—drown his sorrows in dangerous adventures. He accepts an invitation to begin a speaking tour in South America, meeting up with his son Kermit and forming a crew of fellow adventurers to explore and map out one of the lesser known rivers in South America, a tributary of the Amazon then called the River of Doubt but now named the Roosevelt River in honor of ol’ Teddy. The crew is a ragtag bunch, with very little experience sailing or exploring. Their lack of planning and forethought (or maybe they just planned for the wrong things?) lead to mishap after mishap – it’s really a miracle they survived.
Our BPL Book Clubbers were impressed by the crew’s bravery, but astounded by their incompetence. Their boats were too heavy and too large, they didn’t pack enough food or clothing but they had plenty of coffee, and they ended up having to dump tons of essentials just to stay afloat. Oh, and there were cannibals. But perhaps most impressive about this book though is Millard’s writing style. Millard is a former National Geographic writer. She consulted numerous first-hand accounts, personal journals and even a movie filmed by the crew at the time (priorities!), to parse together a compelling narrative that makes readers see, feel, and hear what our explorers experienced. Facts about the Amazon region are interspersed throughout the book, further bringing the setting to life while teaching readers about the lesser-known parts of South America.
We wrapped up our meeting with a discussion of the moral dilemmas River of Doubt explores: was the USA wrong to explore and colonize lands that did not belong to us, decimating native populations in the process? Or were our explorations justified in the name of civilization? Who was really more civilized, the bumbling unprepared explorers or the indigenous people who had survived and thrived on their own for centuries? And where/what/whom do we conquer next? The oceans we’re polluting? Mars? Is any of this exploration worth the expense, both monetary and human?
Our next BPL Book Club Meeting will be Thursday, July 18 at 6:30. We’ll be discussing Cold Sassy Tree by Olive Ann Burns. All are welcome!
Posted by BPL Ref at 10:00 AM