Daisy Jones and the Six by Taylor Jenkins Reid 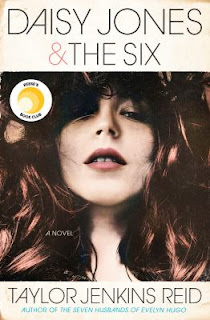 Reviewed by Christy
Daisy Jones and the Six is Taylor Jenkins Reid follow up to The Seven Husbands of Evelyn Hugo. Written as an oral history, this novel recounts the rise and fall of a 70s rock band called Daisy Jones and the Six. I listened to the audio book which featured a full cast of narrators, and it was delightful. I finished the book in two days which I think may be a record for me. It felt like I was listening to a podcast or watching an episode of Behind the Music.
Reid gets into the background of  Daisy Jones’ life as well as the background of the members of the Six and then explains how they fused together to create a popular rock band and one of the most critically acclaimed albums of the 70s. Much like The Seven Husbands of Evelyn Hugo, the characters in felt real, and I kept forgetting that I couldn’t just go listen to some of their songs on Youtube. But eventually that wore off, and I have to admit that I found my mind wandering a bit when the characters get into the nitty gritty of how some of their songs were written. I obviously couldn’t listen to their music so I had no connection to that part of it. The physical book includes all the lyrics to all the songs mentioned so maybe that would’ve helped. I didn’t love this the way I do Evelyn Hugo, and there are a few things I’d tinker with regarding the ending but overall it’s a fun read, and I liked it a lot. I wonder if I would’ve had a different experience reading it traditionally (a lot of readers felt disconnected to the oral history style) but the audio is fantastic, and I highly recommend it.
Reese Witherspoon is supposedly adapting it for an Amazon miniseries which will include original music, and I am so excited to check that out.
Posted by BPL Ref at 12:14 PM