Have a Nice Guilt Trip by Lisa Scottoline and Francesca Serritella 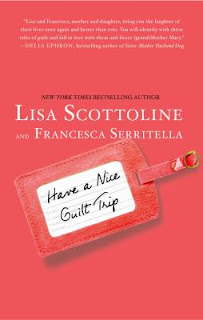 I have been on a Lisa Scottoline kick lately.  In the past two months I have read seven of her books—both novels and humorous non-fiction.  I’ve worked my way through Rosato & DiNunzio, a suspense filled series about an all-female law firm in Philadelphia.  The characters within, from “Tony down the block” to power-hungry rival lawyer Nick Machiavelli, all feel so real.  Lisa and her daughter Francesca also write weekly “Chick Wit” columns for The Philadelphia Inquirer, which are then published as collections and end up shelved in our non-fiction humor (818) section.  This loud and raucous Italian-American family operates with what looks like true affection for one another.  Of course the true character is the matriarch of the clan—Mother Mary.

Mother Mary was a tiny little woman with a big attitude.  A mere 4’11” in height, she lived to age 90 until her passing in 2014, which just happened to be shortly after Have a Nice Guilt Trip was published.  If there’s one thing mothers know, it’s guilt, right?  I think it’s because most mothers would do almost anything in the world for their children.  With that utter willingness to sacrifice, mothers hold a special place in the very existence of their children.  Family dynamics, especially between mothers and daughters, can be tricky, but they are usually born of love.

Mother Mary was quite the contrarian but loved the spotlight (as long as it was on her terms.)  She would insist that she didn’t need the book club party to sing Happy Birthday to her, but would surely enjoy it when the crowd broke out in song.  Mother Mary was also known to wear a long white lab coat, and whether that was because of the extra pockets or the camouflage needed when she just didn’t feel like putting on a bra, well, that’s anyone’s guess.

Lisa writes of relationships as she is sandwiched between feisty mother Mary and daughter Francesca.  Now that Francesca has flown the coop, (I mean, moved out on her own,) Lisa is managing by filling the house with animals.  With four dogs, two cats, chickens, a pony or two…Lisa is a fierce animal lover and defender.  Family can have fur, right?

Francesca brings a fresh perspective to the “Chick Wit” columns and the books in which they are contained.  Best friends, ex-boyfriends, and city living experiences all make an appearance in this young author’s writing.  While I’ve never moved to New York City, had a rock band boyfriend, or made new friends while walking a dog, Francesca is enjoyable and amazingly relatable.  Plus, while Mother Mary may have given daughter Lisa a hard time occasionally, she always had a soft spot for granddaughter Francesca.

Join Lisa, Francesca, Mother Mary, Brother Frank, and all of the furry Scottolines (by the way, the name rhymes with “fettucine”) through this delightful series of books written by this mother-daughter duo.  Additional titles include:  Why My Third Husband Will Be a Dog; My Nest Isn’t Empty, It Just Has More Closet Space; Best Friends, Occasional Enemies; Happy and Merry; Meet Me at Emotional Baggage Claim; Does This Beach Make Me Look Fat?; I’ve Got Sand in All the Wrong Places; I Need a Lifeguard Everywhere But the Pool; and I see Life Through Rosé-Colored Glasses.
Posted by BPL Ref at 9:00 AM