A Risky Undertaking for Loretta Singletary by Terry Shames

Guest reviewer Kevin Tipple is back with his review of a mystery novel.  Check out his blog Kevin's Corner for more book reviews and book news, as well as links to topics of interest. 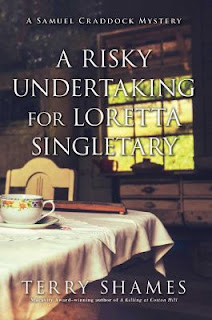 A Risky Undertaking for Loretta Singletary is the eighth book in this long running and very good series. This time Chief of Police for Jarret, Texas, Samuel Craddock becomes increasingly concerned about the disappearance of his neighbor and friend, Loretta Singletary. Until he really sat back and thought about it, he hadn’t paid much attention to the fact that in recent weeks Loretta started dressing different and had a new hair style. Samuel Craddock was used to how Loretta was, her routines such as the one that included her walking over from her house early in the morning bringing home made cinnamon rolls warm from her oven, and the fact that she kept her life fairly private. She is not one to talk about her personal business or share a lot of confidences so he wasn’t paying much attention to the changes she was making in recent weeks.


Then she upset the routine by going missing and can’t be found anywhere. The easy explanations of Loretta taking a trip to visit family, shopping with a friend, don’t fit. Loretta is gone and no one has a clue where she has gone. By poking around a bit in her home and asking a lot of questions of everyone in her life, Samuel Craddock begins to piece together the idea that she has signed up for one of those dating sites. In her case, one that caters to seniors and folks that live in small towns. A little research also convinces him that such sites are dangerous for anyone and that is especially true for the older folks.

When another woman in a nearby town is killed, Chief of Police Samuel Craddock’s fear almost becomes flat out panic. The other woman’s personal circumstances mirrored Loretta’s and she used the same dating site. If the local church going folks would quit arguing over the long tradition of the goat rodeo, Chief Craddock would sure appreciate it as there is far more important matters at stake.

A Risky Undertaking for Loretta Singletary by Terry Shames is another excellent entry in the long running series. The author skillfully weaves together a complicated tale of increasing suspense and mystery as the pages go by. Along the way there is plenty of background detail in two secondary storylines regarding life in Small Town Texas and how everyone knows your business. Those secondary storylines work to relieve the suspense a bit and provide a dash of humor here and there while not slowing down the overall pace of the book.

Make sure you take the time to return to the world of Samuel Craddock and Jarrett, Texas. You will be glad you did.
A Risky Undertaking for Loretta Singletary: A Samuel Craddock Mystery
Terry Shames
http://www.terryshames.com
Seventh Street Books
http://www.seventhstreetbooks.com
April 2019
ISBN# 978-1-63388-490-8
Paperback (also available in eBook format)
272 Pages
$15.95