The Great Mortality: An Intimate History of the Black Death, the Most Devastating Plague of All Time by John Kelly 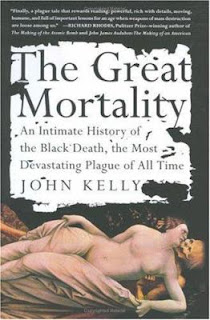 Although I’ve dabbled in a few other genres, I recently veered back to epidemics.  (Look, I just can’t seem to help myself.)  This time, I picked up another book with a massive subtitle:  The Great Mortality by John Kelly.

Yes, I decided to tackle a book on the plague.

The modern world knows it as the Black Death, the bubonic plague, or yersinia pestis; however, in Asia and Europe during the fourteenth century, it was known simply as the “Great Mortality” or the “Year of Annihilation.”  It spread far and wide – and quickly.  As John Kelly points out, “Despite the enormous size of Eurasia and the slowness of medieval travel…the plague spread to almost every corner of the continent in a matter of decades.”  By 1347, it had arrived in Italy and, by 1350, it had reached as far as Portugal, Scotland, and Scandinavia.

Records, of course, are sparse during this time and records that have survived aren’t without error; however, Kelly does an admirable job of stitching together the various stories of victims and survivors to create a comprehensive narrative.  The Great Mortality often delves into primary resources, relating first-hand accounts, and it uses a variety of materials – ledgers, cemetery purchase records, wills, court documents – to explain just how terrible life really was during the Black Death.

Basically, here’s the gist of the whole book:  everything was awful and it was a horrible time to be alive – not that you’d live very long to experience it.  I can’t even verbalize how grateful I am to live in a world where hygiene is the norm and science has given us wonderful things like antibiotics, vaccines, and soap.

The Great Mortality is a very interesting and engaging book.  I enjoyed learning about the history and science of the bubonic plague, and I liked reading accounts from witnesses who did – and didn’t – survive.  I was fascinated (or, maybe, horrified?) to learn there are actually different kinds of bubonic plague and it can morph into pneumonic plague, which scholars and scientists suspect happened during the Black Death.

Overall, I think it’s a pretty great book for learning about a truly terrible time with history.  It’s packed with resources and interesting history, but it isn’t difficult to read.  It does feel like it’s viewed through a very European lens; however, since much of the book took place in Europe, I let it slide a bit.  It does have a tendency to bounce around through time and space, but it isn’t particularly detrimental to the narrative.

It also has footnotes.*