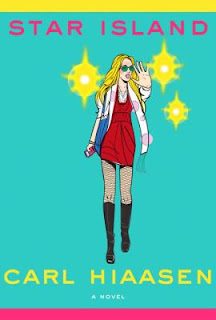 Ann DeLusia is an actress with a very specific role:  she’s playing Cherry Pye, a 20ish pop sensation.  It’s not for a movie or television show, however:  she’s playing for the tabloids. The real Cherry Pye never met a drug she didn’t like or let a pill remain unpopped, so when she is too wasted to attend a high profile function Annie steps in to make an appearance.  Or even when the situation is just too sensitive to allow the unpredictable and unreliable Cherry to show up, which is pretty often these days.  Cherry has no idea that she has a double, and her parents want to keep it that way.  Ned and Janet have been riding their daughter’s fame since she won a child’s beauty contest at a tender age by singing “You Are My Sunshine” and dedicating the rendition to Jon Benet Ramsey, which brought the judges to tears. Janet is the hands-on stage mother who sends Cherry to rehab—er, tummy camp for her bouts of. . . um, gastritis.

Mainly, Ann needs to fool the paparazzi as to Cherry’s real condition on a regular basis.  One photographer in particular is very persistent.  He’s Bang Abbott who actually won a Pulitzer for a photograph of a shark attack—yeah, there’s an unsavory story there-- and he’s obsessed with Cherry. Mainly he’s convinced that he can take photographs of the pop tart which will rival the iconic photos of Marilyn Monroe—who, he believes, is really only famous because of her iconic photographs.  He envisions a coffee table book of photos, published after Cherry’s death, which will enshrine her in the pop culture consciousness and secure his fortune.  He needs to hurry this along, though, because at the rate Cherry’s going that demise could come any day now.

That gives you some idea of the sort of people who turn up in a Carl Hiaasen novel.

Annie needs the work, but she also needs a break from these people, so she rents a car to head for Key West for a few days.  An accident along the way brings her into contact with Skink, a tall one eyed swamp man with a dazzling smile and shotgun shells in his braids who eats roadkill.  He claims he was the governor of Florida and he enlists Annie’s help to stop a busload of investors who plan to turn a pristine section of mangroves into a housing development.

Throw in a bodyguard with a weed whacker for a prostheses, twin publicists who specialize in celebs who have hit rock-bottom and continue to dig, a more than shady ex-lieutenant governor of Florida, a young actor whose breakout role is supposed to be a necrophiliac surfer, and you’re all set for one of Hiaasen’s off the wall, wacky rides through Florida and modern culture in general.

This was my first Hiaasen book so I didn’t really know what to expect. He really knows how to nail certain aspects of pop culture and celebrity, not to mention politics.  My first impression was that I didn’t really like any of these people except for two, but I found myself unable to stop.  I had to see what sort of train wreck was going to happen.

All I will say is that it happened, and it was immensely satisfying.  So much so that I may look for another Hiaasen title and hope that some specific characters turn up.  They’re just too good to be one and done.