Mimi Lee Gets a Clue: A Sassy Cat Mystery by Jennifer Chow 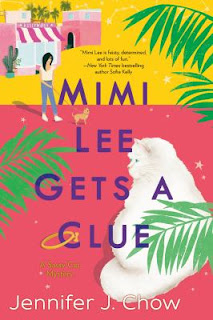 Trying to get a pet grooming salon off the ground isn’t easy.  Mimi Lee has just opened her shop, “Hollywoof” (Slogan:  Where We Treat Your Pets Like Stars) and is hoping to make some connections with an upscale group of ladies so that word of mouth will bring in the clients.  She soon notices an odd thing when more than one Chihuahua seems to have some health issues, but is distracted by a cat her sister pretty much dumps on her.  Mimi isn’t at all enthused about the idea—she prefers dogs—and the large white cat doesn’t seem any more pleased with her than she is with him.  He especially doesn’t like the name she gave him, Marshmallow.

And he tells her so.

Either that, or she is losing her mind which she admits is a possibility. Before she can ponder this development, she is distracted by a customer with a Chihuahua who needs grooming.  The dog seems a bit off, somehow. When Mimi learns that this one came from the same breeder as another young Chihuahua with health issues, she decides to check out the guy’s operation to see if he’s running a puppy mill.  Her reception is about what you would expect:  Russ Nolan is in no mood to deal with some nosy groomer.

Russ turns up dead, of course, and Mimi’s contentious visit puts her at the top of the suspect list.  Good thing she is able to call on a cute lawyer friend for legal aid or else she may find herself out of business and behind bars.

This is a first in series books, so part of the time is spent on set-up rather than plot.  Like Marshmallow, I was a tad put off by Mimi’s declaration that she prefers dogs so I wasn’t quite sure how we were going to get along but by the end we were doing just fine.  One mystery that isn’t explained is how Mimi is able to “hear” Marshmallow, but that may be addressed in the next book.  (I am gullible so I’ll believe almost anything; I bring it up because Mimi wonders a little but doesn’t seem to ask follow up questions.) This one had a lot of ground to cover with Mimi’s back story and her family.  Her mother, Ma, is a definite scene stealer and I enjoyed some of the cultural touches with food and family dynamics.  I also appreciated a little glimpse behind the scenes into the world of pure bred dogs.

But of course for me the star is Marshmallow, grumpy though he may be. He may have his reasons.   I have high hopes that we’ll learn more about him in subsequent books.  And speaking of which, the second book in the series, Mimi Lee Reads between the Lines, is due out November 2020.