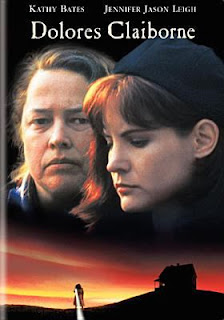 When someone thinks of Stephen King they probably think of drain-dwelling clowns or ax-wielding dads or any a number of iconic horror imagery. A novel about an older woman telling her life story in one long monologue might not make the cut. But Dolores Claiborne has plenty of horror between its pages – mostly of the everyday, human kind.

Dolores has been taken in for questioning by the police after her employer of over thirty years is found dead at the bottom of her stairs. Unfortunately, Dolores has already been under suspicion for decades after the strange, maybe-accidental-maybe-not death of her abusive husband.

The novel is mostly made up of Dolores’ statement to the police. She begins with how she met her no-good husband Joe and goes into great detail about working for her employer Vera as a caretaker. Neither of these are particularly healthy relationships but Dolores takes it in stride. I could see how a book-long monologue doesn’t sound very exciting but Dolores is an interesting character whose story I was eager to hear.

The book is written in a thick Maine dialect to give it some flavor, however I chose to listen to it on audio book which gave it even more dimension (and it’s easier for me to take in a dialect via audio versus reading it on the page). The narrator, Frances Sternhagen, does a fantastic job, and I thoroughly enjoyed listening to Dolores’ story through her. Dolores is a crotchety, out-spoken woman who is not without her charms, and I loved her.

I think Dolores Claiborne is a good example of what people want when they ask for “strong female characters”: she’s not perfect by any means, but she’s a fleshed out, flawed human like anyone else, and she just wants a chance to say her piece.