Get Well Soon: History’s Worst Plagues and the Heroes Who Fought Them by Jennifer Wright 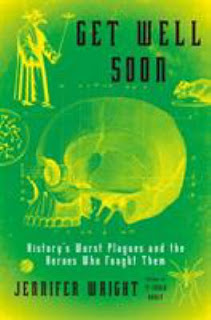 In Get Well Soon, Jennifer Wright dives into some of the worst epidemics in human history – starting with the Antonine plague in Rome and ending with polio in America – and explores how the world handled (or mishandled) them.

I originally listened to the audiobook version of Get Well Soon (read by Gabra Zackman) after it was mentioned in my book club.  I was morbidly curious and thought I would give it a shot.  Little did I know the stars would align in my favor:  it was immediately available on Tennessee READS and I was in need of a good book to get me through my commute – why not, right?

Truthfully, I didn’t expect to find Wright’s book so absorbing or – dare I say it? – funny.  Wright has an unexpectedly sharp sense of humor, which makes learning about horrific diseases and terrifying infections strangely palatable.  Get Well Soon isn’t a comprehensive examination of human disease; instead, it’s more like bite-sized chapters on some of the stranger epidemics in human history and it’s laced with a potent blend of science and humor.

It also focused on the “heroes” – the doctors, healers, physicians, medical practitioners, scientists, social servants, and others – who attempted to thwart the various diseases and, in some cases, cure them.  I was captivated by Wright’s examination of John Snow’s – not that Jon Snow, thank you – work on the cholera epidemics in England and Constantine von Economo’s studies on encephalitis lethargica.

So much so, I actually did some digging and started reading about both epidemics – and I still have a few more I’d like to explore.

I’ll be honest, I really didn’t expect to enjoy a book on epidemics given the current state of affairs, but, apparently, Wright’s book was just what the doctor ordered to snap me out of my reading funk.  (It also sent me down a reading rabbit hole, exploring medical nonfiction, but I think that’s a story for a different time.)  Get Well Soon is a fascinating and fun audiobook.  Not too heavy, not too dense, and not too dark, it strikes just the right median to make its content interesting, rather than debilitatingly terrifying.