The Ghost Map: The Story of London’s Most Terrifying Epidemic and How it Changed Science, Cities, and the Modern World by Steven Johnson 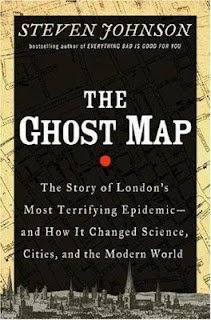 Since I’m still firmly entrenched in medical history and epidemiological mysteries, I decided to check out The Ghost Map, written by Steven Johnson and read by Alan Sklar.  The Ghost Map explores the sordid history of cholera and examines the 1854 Broad Street cholera outbreak, which changed the way cities – and science – operate.

During the nineteenth century, London emerged as one of the first major modern cities in the world.  It just had one problem:  it completely lacked an infrastructure.  Thanks to the lack of sanitation services, clean water, and sewers, London was rife with disease – and, thanks to a cracked well beside an overflowing cesspool, it suffered the worst cholera outbreak in history, which killed more than 700 people.

Besides taking the throne for longest subtitle I’ve ever encountered, The Ghost Map provided insight into the history and lifecycle of cholera – known formally as vibrio cholerae – and examined the work of Dr. John Snow and Reverend Henry Whitehead.  Snow, who was an esteemed doctor (having tended to Queen Victoria herself), and Whitehead, who served as a curate of St. Luke’s Church, worked separately and together during the cholera outbreak to find the index case and helped form many of the basic tenets of epidemiology.

Snow was actually one of the first doctors to pinpoint contaminated water as a source for infection.

I enjoyed learning about Snow, Whitehead, Soho, and London.  Although the topic was rather grisly and gross – I think cholera is a particularly nasty and terrifying way to go – I found myself enthralled with the story.  I liked the random facts Johnson threw in about the modernization of London; I liked the breadth and variety of his research, offering insight into everything from water sources in London to miasma theories to chloroform; I liked the unexpected slip of humor.

Like Get Well Soon, The Ghost Map has a curious but grim thread of humor.  It doesn’t show it very often, unlike Wright’s book, but it always managed to shock me when it did.  Likewise, it always managed to leave me feeling a little astonished – and, maybe, mildly disgusted.  For instance, I’m not sure if I needed to know that a Richard the Raker died in 1326 by drowning in a cesspool.  It’s not a fact I ever imagined I would know.

And now you know it, too.

I was fascinated by The Ghost Map from beginning to end – well, almost the very end.  The epilogue, titled “Broad Street Revisited,” takes a look at modern cities and current issues facing metropolitan areas.  I found it much less riveting than the rest of the book and, admittedly, I tuned out during much of this final chapter; however, I enjoyed the rest of the book immensely and I highly recommend it to anyone with an interest in scientific and medical discovery and Victorian history.

Email ThisBlogThis!Share to TwitterShare to FacebookShare to Pinterest
Labels: Ambrea, and the Modern World, cholera, Cities, England, epidemic, London, Steven Johnson, The Ghost Map, The Story of London’s Most Terrifying Epidemic and How it Changed Science