Krakatoa: The Day the World Exploded: August 27, 1883 by Simon Winchester 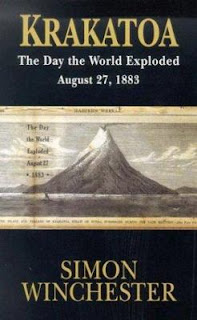 On August 27, 1883, Krakatoa erupted.  Killing more than thirty-five thousand people between the blast and the immense tsunami it generated, Krakatoa quickly became one of the worst – and deadliest – volcanic eruptions in recorded human history.  Its name has become synonymous with cataclysm and, even today, it’s one of the most recognized volcanoes in the world, alongside Mount St. Helens, Mauna Loa, Mount Vesuvius, and Kilauea.

In his book, which bears the name of the infamous volcano, Simon Winchester explores the science and the history of Krakatoa.  He dives into the clash of cultures on the islands of Indonesia – between the indigenous peoples, the Chinese immigrants, and the Dutch colonists who called the island home – and he thoroughly examines the theory of plate tectonics.  He also delves into the aftermath of Krakatoa, chronicling what happened to the volcano and the world after the dust settled.

I recently decided to borrow an audiobook copy of Krakatoa from Tennessee READs.  My reasons were twofold:  one, I liked Simon Winchester’s The Professor and the Madman and I wanted to explore more of his work; and, two, I wasn’t quite finished learning about horrific disasters.

And horrific is probably the best adjective one can use to describe Krakatoa.

I was astonished to learn the eruption of Krakatoa is speculated to be the loudest sound in the world.  According to Winchester, the explosion was reportedly heard as far away as Perth, Australia, and Manila in the Philippines – fully 1,783 miles away!  Sailors, who were docked more than eighty miles from the island, experienced permanent hearing loss and damage to their eardrums.

Likewise, when the volcano exploded, it sent out inaudible shockwaves that were captured by barometers as far as London, Bogotá, and Washington D.C.  Surprisingly, these pressure shifts were captured not once, not twice, but a full seven times.

Winchester, who holds a degree in geology, does a spectacular job of depicting the science behind the eruption of Krakatoa.  Moreover, he crafts an interesting narrative around the volcano and the islands that were irrevocably changed after 1883.

Given Winchester’s credentials and my incipient interest, I expected to enjoy listening to Krakatoa – and I did – but, admittedly, not quite as much as I’d hoped.  Unfortunately, I tended to drift off during this audiobook.  When the science became a little too advanced, for instance, or when a modern story intruded on the past, I would occasionally zone out for a moment or two and then I would be forced to backtrack.

I think that’s more of a reflection of my attention span, though, rather than any fault with the book.