Take a Look at the Five and Ten by Connie Willis 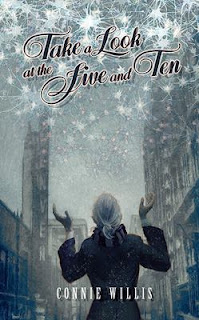 Connie Willis is one of my favorite speculative fiction writers.  I especially love her Oxford Time Travel series, but I have also become a fan of her shorter works. Take a Look at the Five and Ten is classic Willis: it revolves around a rather dysfunctional family with some sympathetic characters and a little something to think about at the end.

Ori’s family is large and confusing:  multiple marriages have given rise to a whole host of step siblings, step-cousins, ex- grandparents, and so forth, but they seem to get together around the holidays.  Ori dreads it, but obediently shows up anyway, knowing that Sloane (daughter of  Ori’s former stepfather’s Dave’s current wife) will be flouting her latest trophy boyfriend and that Grandma Elving (who is the mother of Dave’s fourth wife) will talk endlessly about her days at Woolworth’s in the 1950s.  Not even the food is good.

This time Sloane is showing off Lassiter who is in med school (of course) and studying neuroscience at the same university that Ori attends—not that Sloane lets her get a word in edgewise.  Unlike most of Sloane’s boyfriends, Lassiter seems more thoughtful and he is definitely interested in Grandma Elving’s interminable stories of every detail of her time at the store, much to Sloane’s displeasure.  Lassiter explains to Ori that her incessant repetition of all the details of that time and her need to share are classic symptoms of TFBM:  Traumatic Flash Bulb Memory, which is what Lassiter is studying.  The problem is that there seems to be a missing component.  Grandma Elving never mentions anything traumatic that occurred.

Lassiter enlists Ori’s help to try to uncover the reason for the TFBM.  But is it fair to make a frail old lady remember something that she apparently has tried to forget?

At only 115 pages, I read this quickly in one sitting.  It was lighter on the SF/Fantasy aspects than most of Willis' work but I found the story to be very satisfying.  At first I thought it was too easy, but the more I thought about it, the more I realized the question Willis was really asking.

And that’s why I like Connie Willis:  she encourages me to think.