The Time for Murder is Meow by T.C. LoTempio 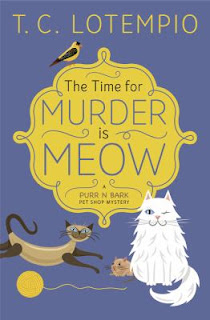 When actress Shell Marlowe’s series Spy Anyone is cancelled, she actually breathes a sign of relief.  Now she is free to go to look after her late Aunt Tillie’s pet store and have a chance to be Crishell McMillan, not a celebrity.  Shell has always loved animals and loved visiting her aunt in the small town of Fox Hollow, Connecticut, so she packs up her Siamese cat Kahlua and moves into her aunt’s Victorian house.

Getting the shop ready to reopen is a chore, but one made easier by the positive feedback she gets from former customers who are anxious to have a pet store again, and who have fond memories of her aunt.

Unpleasantness arises in the form of Amelia Witherspoon, a prominent member of the community who had a long-running feud with Aunt Tillie—and, actually, a lot of other people in town.  She turns down Shell’s offer to loan some of Aunt Tillie’s Cary Grant memorabilia to the local museum’s film festival.  Outraged by this show of pettiness, Shell is determined to petition the rest of the museum’s board to use the material and in so doing makes herself a suspect when Amelia turns up dead.

This is a first in series book, but the author does a good job of introducing characters and setting.  I liked Shell, who is down to earth if a bit blasé about her fame.  There’s a good supporting cast, but I especially liked Gary, Shell’s former co-star who is hoping she’ll reconsider her retirement for a new series.  Of course there’s the standard love interest, best friend, adorable cat, etc. to add depth to the mystery.  It’s a promising start, and I’ll be looking forward to the next in the series.
Posted by BPL Ref at 11:11 AM