The Adventure of the Peculiar Protocols by Nicholas Meyer 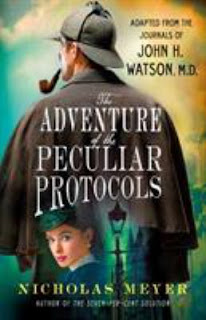 Note:  In Honor of National Library Week, we will be posting a new review every day, Monday to Friday.

When I heard that Nicholas Meyer had penned another Sherlock Holmes adventure, I was excited.  His first Holmes novel, The Seven Per Cent Solution, was a favorite of mine, and it came out at a time when I was reading a LOT of Holmes pastiches, many of which were not so good.  Meyer did a good job of capturing the era and the characters. As with a number of these works, the premise is that the author stumbles upon/is given a dusty old manuscript of dubious origin that purports to be the writings of one Dr. John Watson and the author is transcribing these writings for his audience.

This time around, Sherlock and Watson are approached by Mycroft Holmes about a possibly incendiary document found on the body of an agent.  The document, written in French, purports to describe a secret meeting of Jews intent on taking over the world—“The Protocols of the Learned Elders of Zion”— but Mycroft suspects a forgery.  Proving it to be one may be difficult, but Sherlock, Watson, and a female translator set out for continental Europe to try to find the document’s origin.

As with Meyer’s other Sherlock Holmes books, I relished the fully developed supporting characters, even those based on real people.  (I harbor prejudices about fictional versions of real people. In this case, the book did spur me to read up on some names with which I was unfamiliar.) The document in question also exists as a known fraud since 1921 when Philip Graves of The Times investigated the document’s origin. (This adventure is set in 1905.)

The writing itself was good.  I especially liked that women played important roles throughout, such as Watson's sister-in-law who is a scholar and translator. There are vivid descriptions of train travel, and the way the problem of the document—the potential for devastation—was well-done, with both a detached description and an emotional one. I suspect the author’s objective to be to acquaint more people with the history of the Protocols and nefarious ways they have been used. While this is admirable and timely, I don’t think he quite succeeded. Early on I had misgivings as to the outcome of the assignment and the results were as I had feared. I can’t say more without venturing into spoiler territory.

With that caveat, I enjoyed the narrative overall.  I admired the way Meyer used the “found manuscript” to his advantage; for example, it gave him leeway to give detailed descriptions via Watson but when it was time to speed up the narrative, some pages were missing or illegible, thus sparing us many tedious pages of description/minor incident/travel.  Some will find Holmes to be out of character at times, but having read a number of non-Conan Doyle stories that is not an unusual charge.  Everyone seems to have his or her own view of The Great Detective, which is probably one reason the character has continued to attract fans into the twenty-first century.