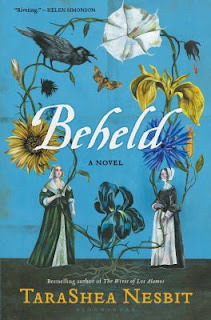 In Beheld, TaraShea Nesbit tells the fictionalized story of the first murder of a colonist by a colonist in the New World. John Billington was accused of killing John Newcomen and thus put to death. While the book has several points of view, including Billington and Newcomen, it is mostly told by the governor’s wife Alice and Billington’s wife Eleanor. (Nesbit does a good job of making the voices distinct from one another.) In the afterward, Nesbit says that while she was doing research on Plymouth she noticed that women’s stories were largely missing, and she wanted to rectify that.
Nesbit takes her time unfolding the story of the murder but at no point did I feel like it dragged. The narration is relayed from the future with the narrators making ominous comments about the incident. I knew the novel was based on a true story but because I didn’t know the details, I found that these little hints of future tragedy helped build the tension. Because it is slow-paced with no grand climax, I could understand if some readers would find it boring. However, the Puritan lifestyle is pretty interesting to me and in that regard, it held my attention. In addition, I can’t say I know how Puritans genuinely talked back then but Nesbit’s dialogue seemed realistic without being impenetrable.
The only thing that really affected my enjoyment was Nesbit’s inclusion of sexual assault that was unnecessary to the narrative. I say that because it happens to an unnamed 13-year-old female indentured servant who we do not know and never see in the story again. I have been unable to figure out Nesbit’s reasoning for including it. Since she wanted to focus on giving a voice to women who were largely voiceless during this time period, perhaps she wanted to include an indentured servant’s perspective. However, it also mirrors an instance that happens later in the book to one of the main characters, so it seems excessive. The latter incident, while upsetting to read, did not bother me quite as much because it was further illustrating the subjugation of Puritan women without feeling gratuitous.
Overall, though, I did like this novel. I don’t know that I could recommend it to mystery or suspense readers but historical fiction readers might enjoy it quite a bit.

** I received a copy of this book from Netgalley in exchange for an honest review. **
Posted by BPL Ref at 10:09 AM