House of Stairs by William Sleator 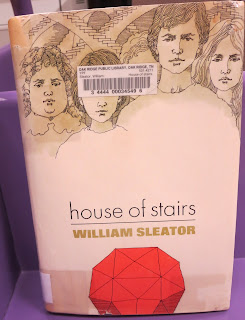 Sixteen-year-old Lola wakes up on a white floor. She doesn’t know where she is but all she sees are stairs ascending and descending around her with sporadic landings here and there. No rooms or doors or even walls. Nothing but stairs. She does eventually stumble across four other teens, however. All of them are sixteen and all of them orphans. No stranger to getting in trouble at the group home where she lives, Lola just assumes this is another form of punishment. But Peter, one of the other teens, is so quiet and meek. Lola can’t imagine him ever breaking a rule or getting into trouble. So what are they doing there?
Lola and Peter come across Blossom, a selfish rich girl who only recently lost her parents. Blossom has discovered a machine that gives her food but only if she performs certain acts. The trio later meets Oliver, the macho alpha male who resents Lola for her natural confidence and leadership, and Abigail, a pretty girl with a penchant towards kindness but who is easily swayed. The five teens soon discover that the acts they must perform to receive food are ever evolving and growing more and more sinister by the day. After weeks of a sporadic food supply, Lola starts to feel that whomever is controlling the place wants them to turn on each other. She wants to resist but she is excruciatingly hungry.
I wasn’t sure what to expect with Sleator’s book. The concept seemed bleak and as stripped down as a story can get. But I was interested in how it would pan out. While the story’s protagonist is mainly Lola (and to a lesser extent Peter), Sleator tries to get into the psychology of each of the characters. He wants to show how they tick, and how they relate to each other. In that aspect, he does the job well. I became really invested in their interactions and where the narrative was going. The novel, released in the 1970s, does have some outdated, problematic elements but I think for the most part the psychological aspects really hold up. If you’re in the mood for some light sci-fi and a quick read, I think it is worth checking out.
Posted by BPL Ref at 9:54 AM