The Hunting Party by Lucy Foley 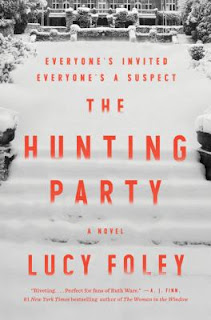 Reviewed by Christy
Carrying on their decade long tradition of a New Year’s vacation together every year, a group of friends book a getaway in the isolated Scottish wilderness. Though close friends throughout their Oxford years, the everyday grind of life has slowly pushed them further and further apart. There’s Miranda, the perfect beautiful one who always gets her way, and her good looking, rich husband Julien; the married couple Samira and Giles who’ve settled down quite a bit after the birth of their first child; Nick and his American boyfriend Bo; Katie, Miranda’s best friend who has been very distant lately; and Mark, with his girlfriend of three years Emma. Emma, relatively new to the group, still feels like a bit of an outsider.

So when her chance comes to plan the annual trip, Emma jumps at it. She books rooms at a snowy wilderness resort where they can each have a private cabin but also congregate in the beautiful, main Lodge. Emma has even planned a lavish dinner for New Year’s Eve. It will be perfect. But on New Year’s Day the groundskeeper finds the body of one of the guests. With police unable to reach them thanks to an ongoing blizzard, the workers and surviving guests realize they are cut off from the world and trapped with a killer.

In the winter, I always want to read at least one or two snowy mysteries but sometimes the weather doesn’t make much of an impact on the story. Fortunately, Foley uses the snowy background for practical reasons (the police can’t get to them!) but also to enhance the atmosphere. I could almost shiver reading some of the passages.

This book was a blast. It was high drama almost from start to finish. I think old friends getting together only to have long simmering tensions boil over is becoming one of my favorite tropes. With the exception of the groundskeeper and the resort manager, this book doesn’t have particularly likeable characters. But they all feel fully fleshed out, even the minor characters who don’t get a lot of “screen” time. I was worried I wouldn’t like this at first because it took me a little bit to get into Foley’s writing (it felt clunky at times), but once the action and drama revved up I didn’t notice it all. This book was fun, a little bit over the top in a good way, and just what I was in the mood for.
Posted by BPL Ref at 11:28 AM