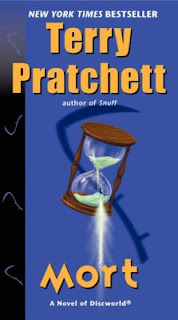 For years I had been encouraged to read the Discworld books by Pratchett.  It’s great fun, I was told.  It’s about a flat planet that sits on the backs of four elephants who are standing on a turtle and there are lots of books, I was told.

I was thoroughly intimidated.  It sounded complicated and there were a lot of books.

Finally, some years ago I was encouraged to pick up one book in the series after being told it was a “don’t miss” Christmas tale entitled The Hogfather.  The premise is that on Discworld, the seasonal gift-bringer is The Hogfather whose vehicle is drawn by (of course) swine.  However, due to circumstances beyond mortal and possibly immortal control, The Hogfather is missing in action and so Death is called in to substitute.

Yes, Death.  The Grim Reaper. Angel of Death. The Pale Horseman.  That Death.

The book left me bewildered, befuddled, and bemused.  Most of all I wanted to know more about Death. Which led me to the real subject of this review, Mort.

Mort is the story of a young man without prospects.  A young man without any particular skills or aptitude but plenty of ineptitude.  A young man who has the bad habit of thinking too much, probably due to his grandmother’s bad influence—she taught him to read.  A young man who is taken to a hiring fair by his father and left unhired for even the most menial of jobs—until a stranger comes by at just before midnight, a stranger who is really bony and I do mean really. He has an odd response when the young man stammers out his name:   “Mortimore. . . . sir.  They call me Mort.”

“What a coincidence,” the stranger replies.

What follows is a wild ride through time, space, and mortality. While there are plenty of perks to the job as Death's apprentice (time off for funerals not being one of them), Mort soon finds that there is a bit more to Death’s request than just needing an afternoon off. He has plans for Mort.

This book was a delight from start to finish.  I almost fell off the treadmill a time or two from laughing, which would really have been ironic. (Sadly, since I hadn't the foresight to write an obituary with that bit of info, it would have been amusing to me only.  Death is a nice enough fellow, but he doesn't have much of a sense of humor.  I elected to finish the book off the treadmill instead.)

Pratchett is known for his insightful satire which is on full display.  Pratchett has so many delightful turns of phrase that the book was festooned with bits of paper marking pages I wanted to re-read or, preferably, make someone else listen to me read.  Memorable characters, moral dilemmas, and imaginative creatures and landscapes filled the book. I was enthralled.

Best of all, I have a lot more books to follow the escapades of Death, Mort, Binky (Death’s horse), and all the other denizens of Discworld.
Posted by BPL Ref at 7:59 AM