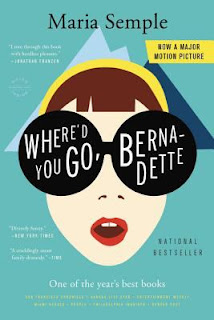 I began this book knowing that there was a movie involved that I might want to watch at a later date. I never dreamed I would end up liking the movie more than the book! Yes, I am one of THOSE people. The annoying ones who spout everything the movie got wrong and telling you how the book is SO much better! I even have a shirt that says, “Don’t Judge a Book by its Movie.”  And now here I am telling you to watch the movie. The world must truly be at an end. But first, let me tell you about the book.
I loved the concept of the book, the story that it told. Bernadette is a wonderful mother with a teenage daughter who actually loves and confides in her. She is an intelligent woman, once an internationally known and respected architect, who is married to Elgie, a major player at Microsoft. Sounds like the perfect family, doesn’t it? These people must have it all together. Since she’s an award-winning architect, their house must be something worthy of a huge spread in a stylish magazine. Only their actual life is nothing like that. Bernadette no longer works, no longer uses her great talent to design amazing buildings. In fact, no longer goes out in the world at all unless it is an absolute necessity. Her home is falling down around her ears, with actual blackberry sprouts pushing through the floor boards. Her amazingly talented husband spends the majority of his time at work. Her extremely bright and personable daughter, Bee, attends private school and works toward being accepted to Choate, the boarding school of her choice. Bernadette hovers in her home using an online personal assistant for everything she doesn’t absolutely have to do herself. She sets an alarm to go and pick up her daughter from school, draping a scarf around her head and perching oversized sunglasses on her nose. She avoids contact with other parents at all cost and never volunteers for school functions as is expected. In fact, she and her husband have their emails removed from the school list so as not to be disturbed by the flotsam and jetsam that regularly arrives to annoy. Bernadette’s, oh so rare, interactions with her fellow parents are hilarious. She refers to them as gnats (annoying, swarming creatures). Interactions with a neighbor whose son also attends the school are some of the best passages in the book.
Things come to a head, however, when Bee reminds her parents that they had promised to reward her history of perfect grades with a gift of her choice. Break is coming up and she has decided to choose a family trip to Antarctica. You heard that right; the family will travel to the ends of the earth while Bernadette struggles to travel to the end of the street. Naturally, this upsetting occurrence wreaks havoc with Bernadette’s already fragile psyche. Her personal assistant is called upon to work night and day ordering supplies as well as seasickness medications. Bernadette supplies all of her credit card numbers as well as personal information to ease the process, and yes, it turns out about as badly as you might expect. Then, Bernadette disappears. Exciting, right? Lots of intriguing plots and subplots, so why in the world did I not enjoy the book?! The story was fabulous and interesting, but almost the entire thing is told through a series of emails, letters, and reports from an amazing conglomeration of different people. I didn’t enjoy interpreting almost the entire story in this form. It became hard to read and sometimes confusing. It becomes apparent that all of this is information Bee has gathered to help her in the search for her mother, but the only part I really enjoyed was the daughter’s narrative, which was quite good. The entire time I was reading the book, I was thinking, “This would probably make a good movie.” I read all 352 pages because it was intriguing and I DID want to know how it all turned out. This book would have been awesome had it been told in a different format. A narrative from each of the main characters, relating their side of the story, or the daughter telling the complete story with a sidebar of the emails and the like added in, but not forming the main bulk of the story.
So there you have it, the reason I liked the movie better than the book was the writing style. The movie was fun and interesting and told the story in a much more enjoyable way. Yes, I was still annoyed waiting for incidents from the book to appear that never did. But overall, I found the story much more enjoyable as told through the visual presentation, rather than the verbal. And yes, it still pains me to say so.

Note:  We do have both book and movie at Bristol Public Library. 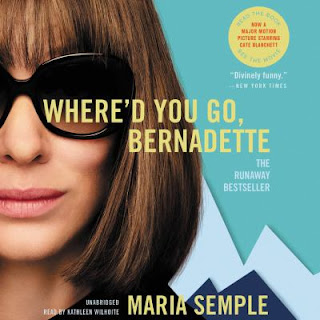