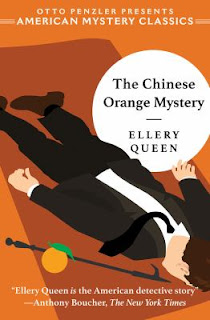 I’ll admit I was excited to see that Otto Penzler was republishing some classic mysteries from the early part of the twentieth century.  Many of the authors I had heard about but never read, and I am pleased to have a chance to rectify that.

One I had read, however, was Ellery Queen.  The Chinese Orange Mystery was not the first EQ tale, but it is a good example of his early adventures.  Ellery is visiting with his friend Donald Kirk, a publisher and an avid stamp collector, when a body is discovered in his office.  Not only has the door been locked from the inside, but most items in the room have been reversed: books have their spines to the wall, chairs upside down, and even the victim’s clothes are on backwards.

Of course, Ellery Queen is going to solve the mystery.  But can you, the reader, figure it out first?

That’s what I loved about the Ellery Queen books.  They played fair with the reader.  The clues are there but putting them together—there’s the challenge!

With all of the books in the classic series, Penzler writes an introduction, explaining the book’s history, the author, and so forth.  I found this one particular good.  While I did know that “Ellery Queen” the author was actually two first cousins using the author as sleuth as a gimmick, I had forgotten some of the details.  It made for fascinating reading.  It also explained something I’d noticed about the books:  Ellery’s character changes over the course of the series.

As for this particular book, I did not solve the mystery before Ellery—but then I first read this mystery when I was in high school. It made such an impression that I still remembered most of the details, so this reading was more to re-acquaint myself with the style and flavor of the books rather than to solve a mystery. (Not to mention that I would have quite the advantage this time around!) They were always set in the present day, but now that “present day” was over eighty years ago, which for me gives the book an added charm.

If you like the puzzle mysteries, by all means give Ellery Queen a try.  I generally prefer the later version of Ellery, who is less smug and arrogant but still able to untangle the knottiest problem.
Posted by BPL Ref at 12:38 PM