The Wives by Tarryn Fisher 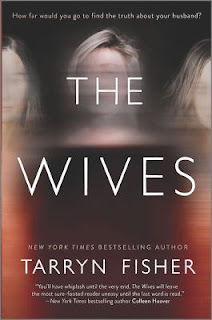 I was intrigued by the concept of this book when I first read about its release. I waited patiently (ok, impatiently) for it to arrive on the library shelf. I grabbed it as soon as humanly possible and took it home to devour. The premise was a new one for me. Thursday, so named because that is the day her husband, Seth, arrives to spend the night, is one of three wives. She has never met the other two and they are, in fact, called by the days of the week that they spend with her shared husband.
Thursday was the second wife, replacing the first who had no desire to become pregnant. When Thursday lost the child she carried and was unable to procreate, Seth added a third wife to bear his children. He spends certain days with certain wives throughout the week in a schedule maintained with ultimate precision. He swears his undying love to each and things continue as smoothly as possible until Thursday finds an appointment card in his pocket belonging to one of his other wives. She now knows her name. Try as she might, she can’t resist the urge to investigate, isn’t that what Facebook is for? First, she is jealous of her looks, but then, she wants to track her down and arrange an “accidental” meeting. What she finds is not what she expected and she begins to question not only her marriage, but the very character of the man she married. Does he have a violent side? Is she in danger? How much longer can she exist as only one of many? The answers take Thursday into uncharted territory and the book reveals that all is not what it seems.
I enjoyed the premise of this novel much more than the actual novel itself. It seemed to slide off the rails halfway through and I wasn’t comfortable with the direction it took. I also need to put a small warning label on the book, if you are uncomfortable with crude language and explicit sex. That’s not my thing and I was put off by this direction that I hadn’t expected. Just be forewarned. I, myself, would not recommend the book for all of these reasons. It was definitely a case of the appearance being better than the reality. I hate to say not to read a book, so now that you know what lies (sort of) between its pages, you can make an informed decision of whether or not this book would be a good choice for you. For me, it was a major disappointment.
Posted by BPL Ref at 10:32 AM