The Cat Men of Gotham: Tales of Feline Friendships in Old New York by Peggy Gavan 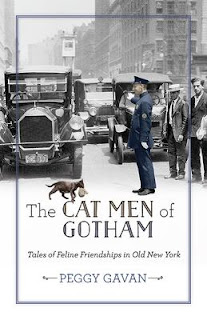 People often have strong feelings about cats. They love them or hate them, and very seldom are ambivalent. Back in nineteenth century New York, felines had many more foes than friends and were often regarded as an annoyance. Perhaps a necessary nuisance as the rat population needed to be controlled, but cats (as well as other animals) were seen as creatures that needed to justify their existence by being of some use to humans. Nevertheless, many cats met a premature end as populations soared and they were seen as more trouble than they were worth.

Peggy Gavan has collected forty-two tales of noteworthy cats in old New York and the people who found value in those feline friendships. A whole chapter is devoted to fire cats, including an 1895 story about Tootsy, a kitten born in the Engine Company No. 27 in Lower Manhattan. Tootsy was high spirited, even learning how to slide down the pole from the third floor to try to hitch a ride when the fire alarms sounded. She was successful a couple of times, holding on to a suction pipe on the truck to ride along with the firemen. Captain Robert R. Farrell spotted her and tucked her away in his coat to keep her safe, as she meowed to the crowd watching the conflagration.

One cat lover mentioned in the book was not a man, but Lulu Grover of East Harlem. Grover was a huge fan of President Theodore Roosevelt and left instructions upon her death in 1906 that all her belongings be given to the President, including her two Angora cats Magistrate Joseph Pool and Queen Fairy Snowdrop. Grover was perhaps not the most mentally stable woman, as she did take her own life with a vial of chloroform. Her estate included a gold ring which was set with two diamonds and a tooth that may have belonged to, you guessed it, President Roosevelt. Although the president claimed not to have known Grover and to have been surprised by her bequest, he did make sure that she received a proper burial and her cats did live out their natural lives in luxury at the White House.

Seafaring cats, hotel cats, theatre cats, police cats, sports team cats—all have stories in this volume. Each short tale can be read in just a few minutes, and are all well documented with over thirty pages of endnotes. This meticulous research has contributed to a lovely collection.

Note for cat lovers who might read this book: (and I can’t imagine that cat haters would be remotely interested, so if you have read this far, you must be a cat lover) we have already established that cats had a rough life a century or so ago. The introduction spends several pages explaining the scenarios where people wanted to be rid of cats and the methods by which they accomplished that goal. Just skip the introduction. Move on to the heart-warming stories of the people who did care about their little furry friends.
Posted by BPL Ref at 12:17 PM