The Deep by Alma Katsu 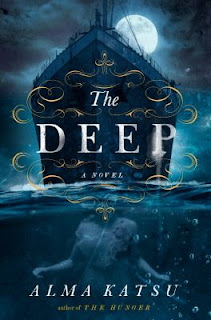 It’s 1916, and Annie has just gotten a nursing job aboard the Britannic which has been refitted as a hospital ship. It’s been years since she worked on a ship but she’s thankful for the opportunity to try to start fresh. When she recognizes a wounded soldier, however, she can hardly believe her eyes. Not only has she seen him before but she’s been on a ship with him as well – when she was a servant and he a first-class passenger. But that should be impossible because she knows he couldn’t have survived the disaster that befell their previous voyage – the sinking of the Titanic.
Katsu weaves dual timelines throughout her book – 1912 and 1916. Though Annie begins the book in 1916 in a psychiatric hospital, we have no idea why she is there though it does seem to be voluntary. Drawn out by her former roommate on the Titanic, Violet Jessop, Annie accepts a new position on the Britannic to help with the warfront. Being on a ship again, Annie is flooded with memories – obviously not all of them good. Katsu takes her time unfolding the plot and in doing so creates a wonderful sense of time and place. The novel is very atmospheric and although Katsu’s prose isn’t necessarily flowery, at times it feels a little decadent. Especially when she is describing first class accommodations. (Cream scraped across a plate after breakfast, descriptions of sparkling jewelry, etc.) I honestly would’ve welcomed more of that but I understand why she didn’t really lean into it.
Though Annie is our protagonist, the story has a full ensemble of characters all of whom I became invested in. Some real-life names make appearances as well such as Benjamin Guggenheim and John Jacob Astor. Violet Jessop, who I had no idea was based on a real person, actually survived both the Titanic and the Britannic disasters! I particularly liked how casually Katsu dropped new information to help readers slowly piece together what was happening. This book was a solid, good old-fashioned gothic ghost story but with a unique premise. I enjoyed it very much, and yes, I had to watch 1997’s Titanic after I was done.

** I received a copy of this novel from Netgalley in exchange for an honest review. **
Posted by BPL Ref at 9:56 AM