Death in a Budapest Butterfly by Julia Buckley 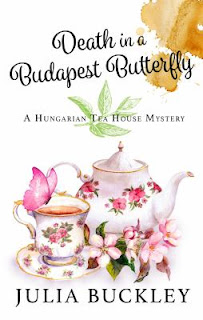 Maggie’s Tea House specializes in Hungarian food and serves traditional European teas—the meal, not just the drink.  With one of their regular groups scheduled, the Magyar Women, Hana Keller is busy preparing special cups and polishing the silver.  Her grandmother may even treat the ladies to a tea leaf reading, which always makes an impression on the participants.

This time, though, what she sees is not supernatural but still frightening: inside a cup someone has written, “the witch with the iron nose,” a reference to Hungarian folklore.

And the woman who drank from the cup is dead.

This is a first in series book that captured my attention from chapter one.  I am a sucker for books that include folklore and this one really delivered.  I also learned about Hungarian food, history, and culture.  Also a bit about tea cups, since Hana collects them; in fact the “Budapest Butterfly” of the title refers to a teacup created by a famous Hungarian artist.

The characters are well-developed and interesting. Hana is an intelligent young woman who loves her family.  Let me ‘fess up here I read a LOT of cozy mysteries and while I don’t mind the occasional ditsy heroine, I find it refreshing to have one who seems competent and calm.  Hana is also a first generation American:  her mother came over as a child and assimilated early, but the Old World traditions linger pleasantly.  It’s a close and loving family, and I quickly became fond of everyone but especially Grandma.  As with most cozy series, there’s the beginning of a love interest in the form of the investigating detective.

There’s also a supernatural element as Hana discovers that the “for fun” tea leaf readings are more accurate than chance would allow.  Hana also realizes that she herself has inherited certain sensitivities.

The description of the food was mouth-watering and exotic.  While the book does come with recipes, I really need samples because I am a lousy cook and no recipe is going to help.

But it was the folklore that really drew me in.  There are a whole host of female spirits, including witches, demons, and fairies, and Hana tries to fit the archetypes to suspects. I do like books which expand my horizons the way this one did.  I liked the Old World feel of the traditions and the foods.

I am very much looking forward to the next in the series.

Note:  I read the paperback version which has a different cover.  See if you can spot the relevant detail that caught my eye: 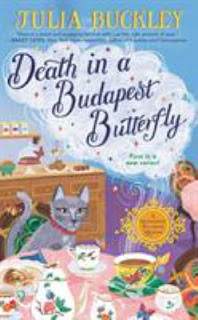