Since She Went Away by David Bell 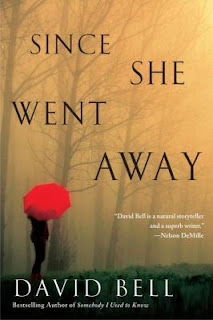 The story begins with the main character Jenna Barton standing in a field with an old barn and numerous vehicles, including police cars and news vans, as officers search for the remains of a missing woman. Instead, bones of a dressed deer are found, and Jenna lashes out at the newscaster who called her there, using vile language.

The reader learns that Jenna, a single mother and nurse, had planned to meet her best friend Celia in a park at night, just three months before. But Jenna was late, and Celia not there. Celia has not been seen since that scheduled meeting. Finding her bones was the object of the search.

A parallel and intertwined storyline features Jenna’s son Jared, age 15, and his girlfriend, a new girl at school with a mysterious and controlling father.  Other young people appear, including Celia’s daughter Ursula, who has been online as “Little Bear’ posting clues to indicate Celia might still be alive. Wishful thinking? Or something more sinister?

David Bell is an excellent story crafter and weaves an exhilarating and sometimes confusing tale that features a serial killer and an endangered young girl. Bell does an impressive job of leading the reader astray before gathering the threads into an understandable if unsatisfactory conclusion. You probably will not see it coming.

For me, a jarring note was the collusion between Jenna and a police detective to allow Jared and his girlfriend to have a sexual encounter in his and Jenna’s home without interference. I do know one parent who behaved this way, but only one.  Maybe I am just old-fashioned but this bit bothered me.

This is another well-written book by Bell, with an unanticipated conclusion.

Email ThisBlogThis!Share to TwitterShare to FacebookShare to Pinterest
Labels: Brenda G., David Bell, mystery, Since She Went Away, thriller