No Time to Spare by Ursula K. Le Guin 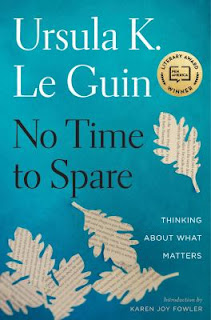 The news that Ursula K. Le Guin had passed away shook the literary world.  Although known primarily for her fantasy and science fiction writing, Ms. Le Guin was also wrote poetry, essays, and short stories in a variety of genres.  Her writing influenced generations of readers and writers: Margaret Atwood, Salman Rushdie, John Scalzi, and Stephen King all paid tribute to her. Gaiman said she had been a hero of his since the age of 11 when he first read A Wizard of Earthsea and that he was honored to introduce her at the National Book Awards to receive the Medal for Distinguished Contribution to American Letters.

I count myself fortunate that I finished reading her latest collection of essays, No Time to Spare,  while she was still with us.  I imagined dropping her a note telling her how much I enjoyed all of the entries, how she made me laugh and made me think.  I even took the book to the Nevermore  Book Club and read aloud some favorite selections (which really, was all of them, but I restrained myself.)

There was just so much in that slim volume! And all so readable.  Her salute to Homer, who did that rarest of feats, describe a war in which both sides had honorable men, heroes, and yet the writer did not take sides.  Her comments on the use and over-use of profanity, about the changes in our expectations, about aging, her cat named Pard, and any number of other topics were insightful, funny, thought-provoking, and all delivered in a friendly tone.  It’s like having a chat with a friend:  a very wise friend with an enchanting way with words.
Part of that may be that these were originally blog posts rather than formal essays.  She didn’t take up blogging until she was over 80, after having read a collection of posts from another writer she admired. Although the tone is casual, the ideas are fully developed and much better expressed than in many a formal essay I have waded through.  I’ve ordered a
copy for myself to keep.

I held off posting this review because I wanted to tie it in with an exciting upcoming event. The Books of Earthsea: The Complete Illustrated Edition will be coming out  October 30, 2018 with illustrations by Charles Vess.  I'm certainly going to get a personal copy.  Local residents may want to check with Mountain Empire Comics: they will have copies of the book, and there's a good chance they will be autographed by Vess.

Also, a documentary about Le Guin is making the rounds of film festivals now and will be coming to PBS in 2019.   You can view the trailer at The Worlds of Ursula K. Le Guin