Lair of Dreams by Libba Bray 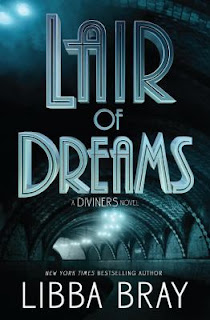 It’s been many years since I’ve read the first installment of the Diviner series (five to be exact) so I thought it was past time to dive back in. Lair of Dreams is the second installment and just as good, if not better than the first one.

At the end of The Diviners, Evie O’Neill has been catapulted into the spotlight, outed as a Diviner – someone with special powers. In Evie’s case she can “read” objects and learn the owner’s history and secrets. In Lair of Dreams, she has a hit radio show, The Sweetheart Seer, and she thoroughly enjoys her new found fame in New York City with parties and drinking every night. Unlike The Diviners, this second installment feels a little more like an ensemble cast with a little bit more focus on Henry, a gay young man looking for his lost love, and Ling, the daughter of Chinese immigrants who wants to be a successful scientist someday. Henry and Ling are both Diviners who can walk in dreams. Henry uses his skill to search for Louis, the one he left behind in New Orleans. Ling walks in dreams to study and experiment. But she also relishes the chance to walk uninhibited by the clunky leg braces she needs in the real world.

It’s a particularly dangerous time to dream walk as there is a mysterious “sleeping sickness” going around the city. People fall asleep and just don’t wake up. Soon Chinatown, where the sickness originated, and its inhabitants become targets of racist scapegoating. While Ling and her family and friends are trying to fend off attacks by police officers and civilians alike, in the dream world a tall man in a stovepipe hat and a coat of dark feathers lurks in the corners of dreamers’ minds and waits.

There is so much going on in Lair of Dreams that I can’t begin to touch on them all. But there is a fake engagement, wild jazzy parties, creepy underground tunnels, and screeching ghosts just to name a few. It is a very rich story with multiple points of views and diverse characters as well. Reading my old review of The Diviners it looks like my only complaint was that it was slow at times. I didn’t feel that at all with this one. It is a very intimidating book (over 600 pages) but I couldn’t wait to get back to it. And though it’s not generally categorized as “horror”, there are some truly spine-chilling moments that wouldn’t feel out of place in a horror movie. Although I will say, just like with the first one, I did not care for the love triangle. I’m not a Grinch, I promise! But the story felt like it came to a screeching halt whenever that was addressed. The book just has so much more going for it than “Who Will Evie Choose?”

But overall, I loved it. Libba Bray has a wonderful way of dropping a reader into a time and place so effortlessly. I also really enjoyed the small vignettes written in between the action where she further describes the times, people in New York City, or people all across the country. They didn’t really further the plot but it did add even more dimension to the story. Honestly, I usually lose interest with series but I’m still excited for this one, and I can’t wait to pick up the third one. I will definitely be reading it sooner rather than later.

Note:  You can read the review of the first book here.
Posted by BPL Ref at 9:13 AM