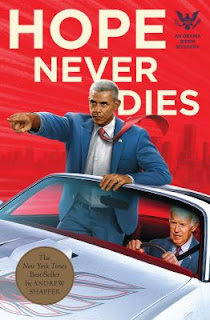 United States Presidents usually go on to do great things after leaving office.  After a respectable break, there are presidential libraries to build, Habitat for Humanity projects, tsunami disaster fundraising, parasailing vacations…well, you get the idea.  But what about former Vice Presidents?

In this bit of escapist fiction, Joe Biden has left the vice-presidential mansion and is bored.  Barack Obama has moved on to new friends and adventures, and his old buddy is feeling neglected.  Not deemed important enough to need a continuing Secret Service detail, Joe is free to wander his old stomping grounds of Wilmington, Delaware.

When his favorite long-time Amtrak conductor, Finn Donnelly, is seen sprawled across the tracks shortly before a speeding train cuts his life short, Joe is more than disturbed.  He doesn’t believe that Finn committed suicide, or was on drugs, or any of the other reasons speculated upon by the official investigators.  Even though now he’s just an ordinary Joe with no special powers, he starts digging.  What really happened to Finn?

Fortunately, Barack is back from his kayaking/windsurfing/parachuting vacations, and ready for an adventure with Uncle Joe.  From Finn’s apartment to train depots to seedy motels, the Obama-Biden team is back together and determined to find answers.

While I didn’t find Hope Never Dies to be laugh-out-loud funny, it was still an amusing, easy to read book.  I could just picture Biden in his Ray-Bans and a Hawaiian shirt.  The detecting duo jump in Biden’s neon green Dodge Challenger with Obama’s protection detail Steve in the backseat.  Ah, poor Steve.  It’s not much of a spoiler to tell you that a series of injuries befall him, allowing the former leaders of the free world freedom for much of their crime-solving adventure.

Hope Never Dies is not Andrew Shaffer’s first foray into parody and satire.  Among other titles, the New York Times best-selling author penned Fifty Shames of Earl Grey (under the name Fanny Merkin, 2012,) How to Survive a Sharknado (2014,) and The Day of the Donald: Trump Trumps America (2016.)  Shaffer has also dipped into non-fiction with Great Philosophers Who Failed at Love (2011,) and Literary Rogues: A Scandalous History of Wayward Authors (2013.)
Posted by BPL Ref at 10:27 AM