A Season with the Witch: the Magic and Mayhem of Halloween in Salem, Massachusetts by J.W. Ocker 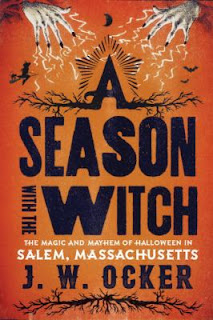 J.W. Ocker likes to travel quite a bit. But his destinations are almost always weird – so much so that he regularly documents his adventures in the travelogue blog Odd Things I’ve Seen. He’s written several books on his travels including Poe-Land: The Hallowed Haunts of Edgar Allan Poe.  To write  A Season with the Witch, he moves his wife and daughters into Salem, MA for the entire month of October to observe and participate in their Haunted Happenings. Anyone with a love of history and all things weird and creepy would probably get a kick out of Salem during the month of Halloween. Just be sure to book many, many months in advance.

Ocker begins with a brief overview of the Salem Witch Trials and America’s fascination with them. He describes historical sites pertinent to the trials including grave sites, judges’ homes, and where the gallows supposedly stood. (Behind a Walgreens now, in case you’re interested.) He then goes on to discuss the various kitschy museums around town and even throws in some pirate and maritime history for good measure. He interviews street performers, street preachers, shop and restaurant owners, actual witches who live and practice in Salem, and regular every day Salemites. He eats carnival food and drinks Candy Corntinis. (Any autumn or Halloween themed cocktail he sees, he tries.) He visits the filming locations for movies like Hocus Pocus, The Lords of Salem and a string of Salem-related episodes of Bewitched. He also talks in depth about the often-maligned statue of Elizabeth Montgomery. On the big night he and his wife take their daughters trick or treating down a street where the residents sit on their porches to hand out candy. (And in one case, pumpkin pie jello shots for the adults!) One cheery resident wrote down where each trick or treater was from (she was already up to six different states), and another proclaimed he had given out 900 pieces of candy the previous year. And that’s not even getting into the wild party that is Essex Pedestrian Mall on Halloween Night.

This book was so much fun to read. Ocker’s writing is warm, conversational, and often times laugh out loud funny. As a self-described “spooky person”, he was clearly having a blast living in and writing about Salem, and it’s contagious.  Although I would love to visit Salem myself one day I already feel like I’ve at least passed through.

The only negative thing I can say about A Season with the Witch is that it is full of simple grammatical and spelling mistakes. He gets names wrong (including Jack Skellington and Rob Zombie’s wife), and it seems as if a more thorough proof reading was skipped. I’m not sure why that would be unless they were rushing to get it out in time for Halloween. Regardless, while irritating, it wasn’t enough to damper my enjoyment. I think anyone who is interested in history, pop culture, travel, or Halloween will enjoy this book immensely.
Posted by BPL Ref at 12:34 PM