Once again, we are pleased to have Kevin Tipple provide us with a guest review.  Kevin's own award-winning blogspot features reviews, news, and author interviews with an emphasis on the mystery genre.  Check it out at Kevin's Corner! 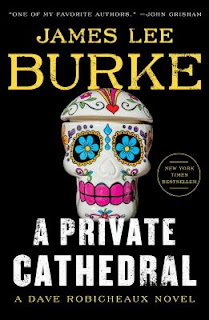 A Private Cathedral: A Dave Robicheaux Novel is a book of two times. Set a couple of decades ago, it has numerous references to the here and now concerning the fight for social justice, the current occupant of the White House, and more. As one always expects in a Dave Robicheaux novel, aspects of the paranormal are front and center. Sometimes those aspects are subtle. At other times, like in this read, those aspects are major – if not the major character of the book.

In the here and now of the book set more than two decades ago, Dave Robicheaux is on a dock on the Texas gulf coast the night before he has a meeting at the Huntsville Penitentiary. He is out of work and grieving the loss of both his wives. He is a lonely man dreading the meeting the next day and thus thinking about history, his life, and other matters when he sees Johnny Shondell up on the bandstand playing and making the night come alive with his music.

He knows Johnny from watching him grow up in New Iberia after his Uncle Mark took over raising him after his parents were killed in a plane crash. Robicheaux knows all about his Uncle Mark and where the family money comes from. The family is powerful and their money comes from a long history of doing what they wanted to whomever they wanted to and getting away with it. Despite the family legacy, it is clear that Johnny is one of those rare musical gods who walk among us. He is watching Johnny and thinking about legacy, intended and otherwise, when his thoughts are interrupted by Isolde Balangie.

Dave Robicheaux is also well acquainted with her family and their legacy though he is not familiar with her specifically. Among other things she tells him, she mentions that Johnny is to “deliver her” to his Uncle Mark. She uses that phrase and Dave Robicheaux is deeply disturbed by the obvious implications of such a phrase. While she clearly has feelings for Johnny, their union is not to be as the families have made their decision and are using her to craft a shaky peace. There is hatred between the families that goes back four hundred years and she is to be the sacrifice to end the conflict. Stopping such a situation isn’t something he could do anything about, even if he wanted to, and at this point he bids her a good evening and moves on.

The next day he eventually meets with inmate Marcel LaForchette. Marcell is one of those folks who seems to have been born the way he is and never had a chance to be anything other than evil. The nature of evil has always been a topic of interest and contemplation for Robicheaux and such is the case here. Marcell started his first prison sentence at the same time and same age as Robicheaux graduated High School and was shipped off to Vietnam. While Robicheaux was trying to stay alive in the jungles of Vietnam, Marcel was trying to stay alive in the correctional system. Marcel wants Robicheaux’s help in getting him sent back to Louisiana to serve his parole sentence after he is released from the Texas prison system. To get that help, Marcel will share some information that could be of interest since Robicheaux brought up the Balangie family in their conversation.

Eventually, Marcel tells him that he was the driver on a killing for the Balangie family.  The guy was a child molester. He was killed and dumped in the swamp on the north side of Lake Pontchartrain.

Robicheaux goes back to New Iberia and soon realizes he is being followed by people he would prefer not to have following him around. He is still bothered by what Isolde said and now these two guys are on his tail and are apparently trying to send him some sort of message. They work for the Shondell family and clearly want him to know he has their attention. Then word comes out, with Robicheaux doing nothing, that Marcel LaForchette is out and back in New Iberia. While Robicheaux does not want anything to do with any of it, soon he as well as Clete Purcel are in the thick of it.

A Private Cathedral: A Dave Robicheaux Novel is a complicated read that is part crime fiction, part philosophical text, part history lecture, and a massive amount of the paranormal. It would be easy to label this as a Romeo and Juliet style crime fiction tale and it is that on the surface. It is also far more complicated than that on every level. Robicheaux and Purcel always have had other world or paranormal experiences at some level in the books, but this one is very much out there with that stuff. It is a complicated tale of the nature of evil and the power of redemption.

A Private Cathedral: A Dave Robicheaux Novel is not an easy book to read. Grief is a major part of this book. Robicheaux spends a considerable portion of the book contemplating his loneliness and the loss of both spouses. His grief and sense of isolation, even when around others, is powerful and resonated deeply with this reader and thus was very tough to read.

There are also a tremendous number of references and allusions to different things in history, philosophy, religion, and more. While I caught and understood many of them, I am very sure that I missed more than a few. This is not a fast read as much of it is contemplation of various things interspersed with action of various types. This is not a read that you will finish fast.

A very complicated and powerful read, A Private Cathedral: A Dave Robicheaux novel is well worth your time.

A Private Cathedral: A Dave Robicheaux

With my son’s help, I was able to get the eBook version from the Dallas Public Library System and the Libby app. The book is still on order in hardback for the library so if Scott Tipple had not made things work, I still would be waiting to read it.